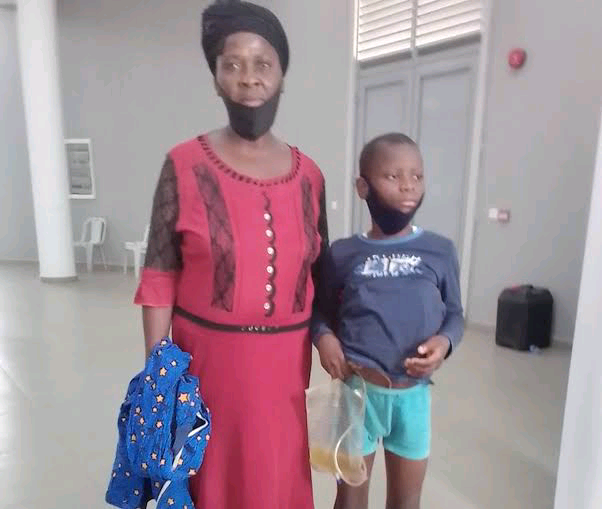 An 11- year- old boy, Osasu Omoigui, who was allegedly hit by a stray bullet on his genital during the #EndSARS protest, has approached the Edo State Judicial Panel of Inquiry for victims of SARS and related abuses by police, demanding a N50 million compensation.

She told the panelists that the incident happened along Old Sapele road, Benin City, when she asked her son, to go and give his father ripe plantain.

According to Mrs. Omoigui’s narration before the panel, while Osazu was on his way, he was hit by stray bullets from police operatives, who were dispersing the #EndSARS protesters.

She said her son was later treated at and discharged from the University of Benin Teaching Hospital, UBTH.

She said ever since the incident, she has been spending her little resources on him.

The 61-year-old mother, revealed thaat little Osasu can only pass out urine through a fixed pipe on his abdomen, a situation that has forced him to always be on wrappers instead of trousers, and can no longer go to school.

Pleading with the panel to grant her son the sum of N50 million as compensation for the pains he has been subjected to, and also to take care of his medical bills, Mrs Omogui passionately appealed to the panel to do all in its power to see that he could have his life back.

Moved by the plight of the 11-year-old Osazu, chairman of the panel, retired Justice Ada Ehigiamusoe, said the child’s condition must be treated with prompt attention.

He said “I have a medical doctor in my team, looking at the young man; he is about 11 years old, he is unable to dress properly like normal human being.

“We found him to be wrapped in wrappers and the medical doctor in my team, examined him and found that he is badly damaged in his genital region and we have reviewed that this calls for an emergency intervention.

“We will do what is necessary and required of us, just like the state government has always done. Matters of this nature must be treated promptly.

“If you recall, we had similar matters of about two of them, deaf and dumb, more than that and promptly, the state government intervened. They did not even wait for us to make our final recommendations. So, I am very sure with this.

“Look at the condition of the boy, so pathetic, and it is not the police, it is a stray bullet. It is one of those things, the consequences of that protest. We can’t really lay our hands on anybody, but we will try our best to make adequate recommendations.

“We have reviewed instantly, and we have reviewed, all of us, we have the combined view that it is meritorious, deserving compensation, he needs urgent medical attention. So, that is our stance.”

Justice Ehigiamusoe also led panel members to raise money for him, which was immediately given to him.