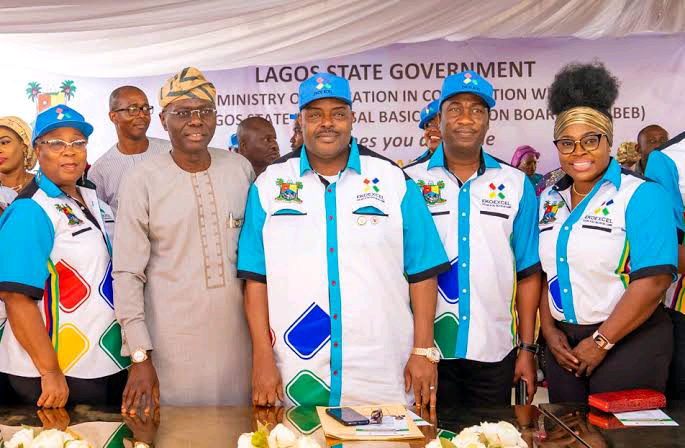 As part of the administration’s commitment to lift education, especially the basic education subsector, to the next level, Governor Sanwo-Olu introduced the EKOEXCEL initiative in 2019. EKOEXCEL is abbreviation which simply means EKO Excellence in Child Education and Learning. 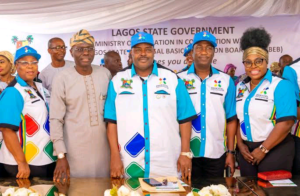 According to Governor Sanwo-Olu, the reason behind the initiative in all public primary schools was “to change the learning outcomes for pupils.”

The governor had said, “In the last couple of years, we have built strong foundations…We invested in curriculum development through EKOEXCEL to change the learning outcomes from our schools.

“We believe a solid foundation for our children starts with qualitative primary education; hence our deliberate focus on primary school education and reform.”

The governor pledged further investment in education following the success the EKOEXCEL programme has achieved.

He said, “We will continue the massive investment in the education sector by improving the capacity and welfare of our school personnel, making the sector more ICT-compliant, exposing our teachers to international best practices.

“Our administration is irrevocably committed to give utmost attention to the education sector, particularly the public school system.” 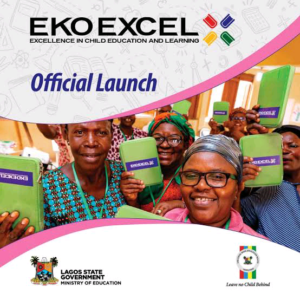 EKOEXCEL is a government-designed, funded and led programme, which is transforming the basic education sector in Lagos State, by upgrading over 1,000 primary schools into world-class 21st century learning environments that deliver results.

And what are these results? Results in learning, as EKOEXCEL is dramatically accelerating learning, twice in mathematics and thrice in literacy that schools without EKOEXCEL.

Enthusiastic schools, which have become more energetic and joyful, where pupils are eager to come to school.

Support for teachers, where the teachers always have what they need to succeed, with thousands of hours invested in additional teacher coaching.

Upskilled teachers are trained for the modern classroom, with state-wide training in future-ready pedagogy delivered to all EKOEXCEL teachers.

Learner-centred environment, as every pupil gets the individual attention he or she needs in a rich learning environment.

Transformative technology is provided for teachers and pupils, with mp3 devices delivered to the pupils to aid and support learning at home. 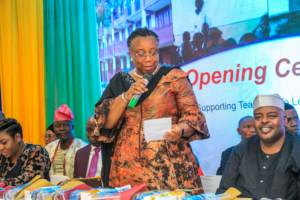 The effect of EKOEXCEL in the schools was so visible that within seven weeks, pupils in EKOEXCEL public schools advanced in numeracy twice as fast and in literacy thrice as fast as their peers.

EKOEXCEL is also helping pupils to learn better in a technology-driven environment.

EKOEXCEL, an excellence in child education and learning, which is an education transformation programme of the Sanwo-Olu administration to reposition basic education in Lagos State to enhance teacher effectiveness through leveraging technology to support, train and motivate teachers to improve children learning outcome at the primary school level.

Under the initiative, there are improvement in school activities, including enrolment of  over 418,000 public primary school pupils; pupils’ attendance has improved from 37 per cent to 74 per cent; teachers’ attendance also improved steadily to 90 per cent; while the pupils’ are reading an average of 311 per cent more correct words per minute compared to pre-EKOEXCEL era and 87 per cent of parents confirm that children have improved since the commencement of the initiative in Lagos public primary schools.

The EKOEXCEL effect was co-authored by The NewGlobe, in partnership with Lagos State Universal Basic Education Board, LASUBEB. 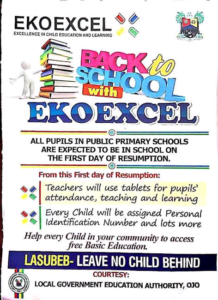 EKOEXCEL pupils advanced in numeracy twice as fast as pupils in traditional schools. In literacy, the contrast was even greater, with EKOEXCEL pupils progressing three times as fast as their peers in comparable schools.

EKOEXCEL also has Self Study Activity Packets, SSAPs, which are scientifically-based, to help pupils studying at home practice and learn core concepts from the Nigerian Syllabus.

The SSAPs include sufficient practice problems, comprehension passages and other activities that help pupils progress through the core topics of the Lagos curriculum.

Each week, new EKOEXCEL@Home SSAPs are available for each grade level to be accessed free online. Pupils can also access past daily activity packets for additional practice and revision. 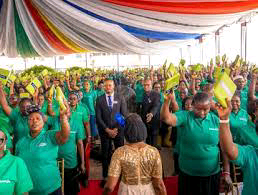 The SSAPs are available for Kindergarten, Nursery 1 and 2 and Primary 1 to 5. Not only that, they are parent-friendly, with adequate audio learning materials.

As is with every government initiatives, there have been criticisms trailing the EKOEXCEL initiative, however, despite the attending criticism of the initiative, parents of EKOEXCEL pupils, a critical stakeholder segment, have nothing but praises for the initiative. Hear one parent’s impression about the initiative, “My children are now more interested in going to school early than ever before, they come back home singing and teaching us new words and they even construct better sentences. For us, it’s a great feeling to see the changes EKOEXCEL has brought to our government schools.”

Another parent said, “My child is now excited and happy about going to school since the inception of EKOEXCEL, he is always talking about cheers and strive points now.”

The Sanwo-Olu-led administration has insisted that it will not adopt or embark on an education system that does not ensure the delivery of 21st century benefits of a modern-day primary education system.”

Speaking on the main challenges of the initiative, the Executive Chairman of the Lagos State Universal Basic Education Board, LASUBEB, Hon Wahab Alawiye-King, a former member of the Lagos State House of Assembly and the current Dean of Forum of SUBEB Chairmen in Nigeria, said that some of the initial challenges of the EKOEXCEL initiative included “technical glitches, comparison of traditional methods of teaching with the new methods, lesson completion rate,” among others.

He however assured that the programme is doing excellently well from where “we started, and where we are headed,” insisting that a lot of teething issues have been addressed, promising that LASUBEB will continue to improve upon it as EKOEXCEL progresses.

In responding to these challenges, the LASUBEB boss disclosed that the board mobilized field support officers to provide learning and development support to the teachers in their schools, adding, “This has in turn helped the teachers with lesson completion and improved their understanding and application of the methodology. There has also been increased motivation for the teachers, because of the successes recorded. Teachers are also more dexterous and have exhibited high level creativity in managing the class and time better. 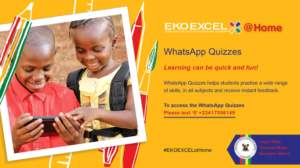 “Also, there are dedicated WhatsApp groups and toll-free telephone lines for communications with teachers as part of the machineries put in place to ensure  continuous support for teachers.”

Alawiye-King informed that the response to the EKOEXCEL initiative by stakeholders – teachers, parents, government officials, among other – has been tremendous.

He added that parents and stakeholders have showered the government with praises and encomium for this laudable educational initiative. For parents, they have expressed satisfaction, as their wards are more interested in learning and coming to school. Gone are the days you walk into a school without teachers present to teach. Through EKOEXCEL, teachers are receive unprecedented training, coaching, and support in all areas of learning management; starting from upskilling in the application of technology and the science of learning in their everyday functions, to constant coaching on lesson delivery, pupil motivation, classroom management and focus on pupil achievement.

“Thus, teachers, parents and communities have been very receptive due to the significant impact EKOEXCEL is making in teaching and learning outcomes.”

Insisting that all the six KPIs affect pupils’ learning outcomes and contributed to the sub-par achievements in literacy and numeracy, he added,  “With EKOEXCEL, all of the KPIs are being addressed by a technology-based platform, which provides teachers with all the necessary tools and support that they need to help their pupils learn. These indicators are consistently monitored and deliberately targeted by support staff, whose KPIs are predicated on optimal teacher and pupil performance. 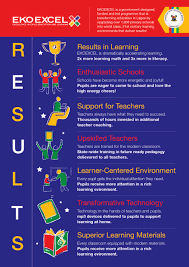 “Clearly the ability to monitor these KPIs and work deliberately to improve them is the game changer with EKOEXCEL.

The SUBEB boss also  averred that so far, there are no key changes required, except to ensure continued improvement on usage and adaptability.

According to him, this would be done through constant engagement of stakeholders and tailored in line with the approved Nigerian curriculum.

Understanding and acknowledging the critical role of teachers in the teaching and learning process, Alawiye-King said that his board acknowledges and understands the teachers’ role as a critical index to the overall success of EKOEXCEL.

Subsequently, he revealed that through the initiative, teachers are being given extensive support.

He said, “To summarize, teachers are supported and consistently upskilled through the following system:
●Multi-day, in-person induction training for teachers and head-teachers;
●Fully-staffed regional team for data-driven coaching and professional development;
●Coaches and mentors visit each classroom three times a month to support teachers with specially equipped tool and instructional strategies;
●A well-trained resolution team constantly within reach through a toll-free customer care system, who are dedicated to support teachers on technology and other administrative issues.” 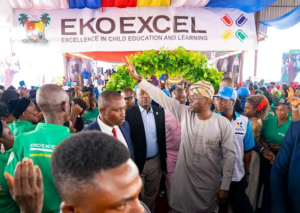 On the impact of EKOEXCEL on pupils’ enrolment and Out-of-School Children, OSC, in Lagos State, Alawiye-King averred that the initiative has “already shown dramatic, research-proven gains in pupil learning.”

He further disclosed that there are other initiatives of the Board which strengthens EKOEXCEL’s ability to drive results in enrolment rate and eradication OSC.

He added, “One of such is the board’s Project Zero Initiative – a programme designed to tackle the menace of OSC, particularly those who have dropped out of school due to the socio-economic impacts of COVID-19 pandemic, by providing them with school uniform, writing materials, sandals and socks.

“All of these put together are part of the board’s effort to ensure that no child is left behind; and we will continue to upscale and evaluate as we progress.”

Asked what his board is doing to ensure continuity of this laudable initiative post-Sanwo-Olu administration, Alawiye-King averred, “Like every other government programme, EKOEXCEL takes cognizance of our socio-cultural dynamics, hence the capacities of our teachers and quality assurance officers are constantly being enhanced on the operations and as such, they are able to provide back end support where necessary. Also, technical expertise and direction is being supported by Lagos State Ministry of Science and Technology, to further enhance the efficiency of the programme.

“In essence, all stakeholders will readily support the continuity of the programme due to its visible impacts on the pedagogy, as well as teaching and learning outcomes.

“There is a transition plan collaboratively being worked between the technical partner and LASUBEB. This plan includes a roadmap of gradual handover of the program to government and other stakeholders.”

He therefore requested for the continued support and cooperation of all stakeholders, as LASUBEB is geared to continue to “provide qualitative and accessible basic educational service delivery to all pupils across all our 1,017 public primary schools in Lagos State.

“We will not relent in our effects to transform and reposition basic education in Lagos State to enviable greater heights.”