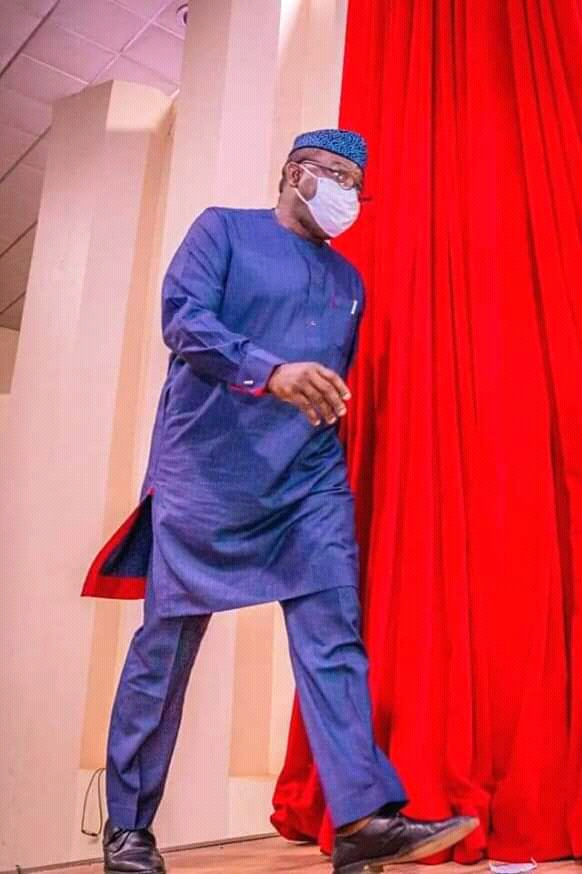 The Speaker of Ekiti Youth Parliament, Mr Toba Fatunla, has commended the state governor, Kayode Fayemi, for pursuing a sustainable tourism policy aimed at the economic empowerment, employment generation and boosting the financial capacity of the residents of Ekiti State.

Mr Fatunla made this observation in a speech he delivered yesterday in Ado Ekiti as a guest speaker at Team Ekiti Tourism Development Convergence on Olota Hills, organized by the Office of the Senior Special Assistant, SSA, to Governor Fayemi on Tourism Development in conjunction with Ekiti Youth Parliament, in celebrating Dr John Kayode Fayemi’s two years into his four-year second term tenure.

Speaking onthe theme of the convergence, ‘Harnessing Ekiti State Tourism Potentialities for Empowerment and Socio-Economic Development,’ with sub-theme: “Ekiti Youth for JKF Tourism Vision,” Mr Fatunla lauded Governor Fayemi for his proactive sensibility of identifying the youth as a potent force and agent of planting, germination and blossoming of his tourism vision for the state.

He pointed out, “I must sincerely commend Governor Kayode Fayemi for acknowledging and recognizing the youth of Ekiti, not only as a partner in progress and necessary collaborator at driving his tourism policy, but also as a co-policy formulator, whose views  must be sought in respect of tourism policymaking in the state.“

Assuring Governor Fayemi of the readiness of Ekiti Youth at keying perfectly into his tourism vision, Fatunla enumerated seven thematic areas which the youth can be of immense help to the state, including: social media strategy, tourism market strategy, ambassadorial status, youth tourism formation, youth tourism enterprises, youth tourism infrastructure development and youth monitoring and evaluation of tourism projects in the state.

Promoter of Discover Ekiti Initiative, Mr Ade Peculiar, commended Governor Fayemi for creating conducive atmosphere for tourism business to grow and for ensuring the appointment of professionals to oversees the sector.

He recalled that Governor Fayemi’s tourism policy has led to the global acceptance and embrace of Hike Ekiti Mountains as an international adventure event, which he inaugurated in April 2019 and the opening up of other hiking mountains like Olosunta Hills, Ikere and Abanijorin Mountain in Iyin.

Mr Peculiar enumerated the various opportunities that are waiting for Ekiti youth to be tapped in the tourism sector and called on them to always think out of the box to make money from tourism.
He commended the SSA to Governor Fayemi, Mr Wale Ojo – Lanre, for his creative energy and super ability to organize the Convergence on Olota Hills, Ado Ekiti, with special programmers, which include panegyric chanting, pounding of yam and invitation of the daughter of the late Elemure Ogunyemi, Funmi Ogunyemi, who sang beautifully by extolling the tourism potentialities of Ekiti State and the strides of Governor Fayemi.

Earlier, the SSSA to Governor Fayemi on Tourism Development, Mr Ojo-Lanre, in his welcome remark, enumerated a long list of the achievements of Dr  Fayemi in the last two years, which included the resuscitation of the hitherto moribund Ekiti State Council for Arts and Culture, which ensured that Ekiti State bagged first position as the Most Creative and Innovative State in Nigeria at the 2019 NAFEST, held in Benin; hosting of the 2019 EKIFEST after four years of being in the doldrums in December 2019; sponsorship of Ekiti State Standing Performing Troupe to Budapest, Hungary, in November 2019; the recreation of Ekiti State Ministry of Arts, Culture and Tourism in December 2019 and the appointment of Prof Rasaki Ojo Bakare as the commissioner; facilitating of Ekiti State Delegation to Rio De Janeiro Carnival, Brazil to market Ekiti tourism potentials, in February 2020; appointment and injection of 32 professionals artistes into the Arts Council; the passage of Ekiti State Tourism Law; creation of the Office of the Senior Special Assistant on Tourism and appointment of Mr Ojo – Lanre; inauguration of the process for the formulation of Ekiti State Tourism Master Plan; releasing of COVID-19 palliatives to hoteliers; the discovery of three natural tourism sites and the latest unveiling of Ekiti State Performing Art Company.

He revealed that Governor Fayemi has tasked his office to ensure the involvement of youths, tourism stakeholders and practitioners at promoting, marketing and enhancement of tourism development in Ekiti State.

Mr Ojo – Lanre disclosed that his office deliberately picked Olota Hills for the Convergence for JKF-2 @ 2 Tourism Developments so as to showcase and project its beauty as a hill, where you can gain a panoramic view of Ado Ekiti.

He specially thanked one of the guests  Alhaji Dauda Lawal, a community development expert, for believing in the tourism vision of Governor Fayemi and expressed gratitude to Davies Hotel, Ibadan; INFOGEM Company; Triple G Eco Revival Solutions and Awori Tourism for supporting the event.

The custodian of Olota Hills, Chief Ogunojo Aduloju, commended Governor Fayemi for his policy on value reorientation, cultural rejuvenation and tourism enhancement, which is paving ways for the promotion of cultural and tourism sites for wealth creation in the state.

Chief Ogunojo prayed for Governor Fayemi and declared that his two years in the saddle has been robust years for the culture and tourism sector, hoping that the next two years would be more memorable and exciting.