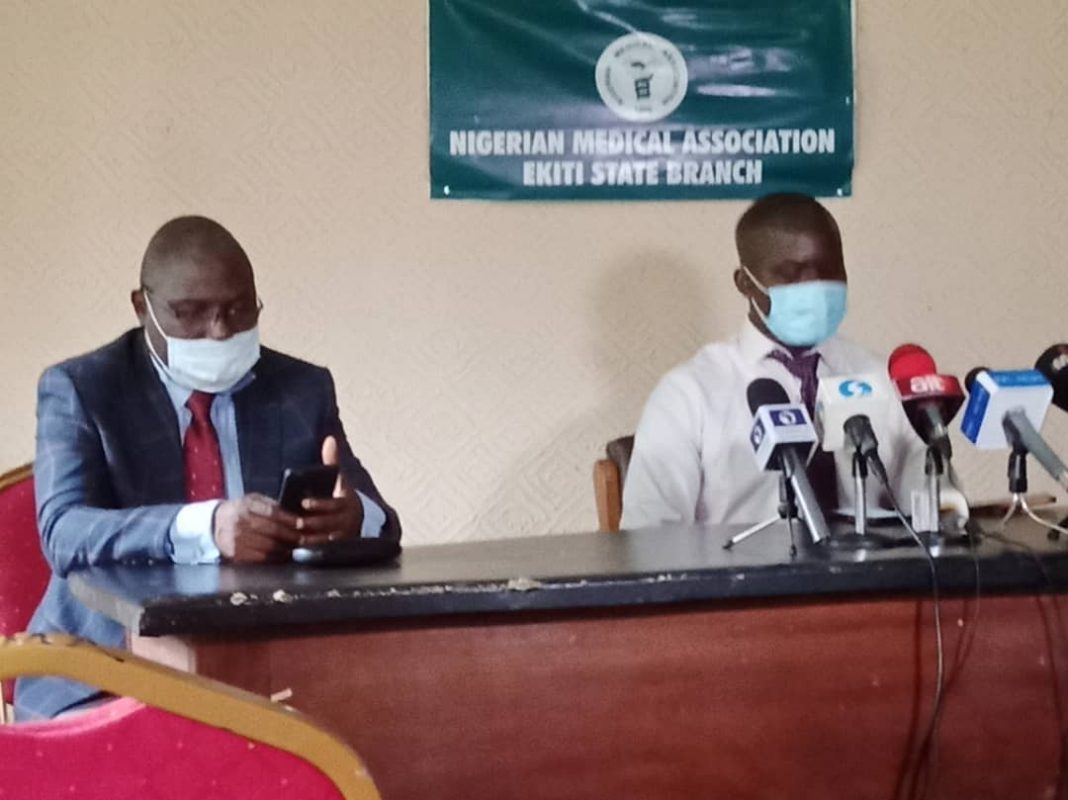 The National Association of Government General and Medical Dental Practitioners, NAGGMDP, in Ekiti State has accused the state government of paying lip service to delivering the desired healthcare services to the people of state.

The association made the assertion in a statement jointly signed by Dr Kolawole Adeniyi and Dr Toyese Adeleye, its Chairman and Secretary respectively, and made available to newsmen in Ado-Ekiti.

The statement, which accused the Kayode Fayemi-led administration of taking the health issues of the people of the state with frivolous levity, described a recent press statement signed by the state Commissioner for Information and Values Orientation, Mr Muyiwa Olumilua, as uncompassionate and a deliberate attempt to confuse the innocent populace.

Olumilua had in a statement signed on behalf of the state government expressed dismay over the continued stay-at-home by members of the medical body, in spite of its efforts to transform the health sector in the state.

According to Olumilua, formal and informal steps have been taken to appeal to the striking doctors to call off the strike, including the intervention of well-respected citizens of Ekiti, but the doctors have remained adamant.

But NAGGMDP in its statement said that government had only exposed its attempt to strangulate grass root healthcare, hence its refusal to take seriously the two fundamental healthcare strata in the state.

The association maintained that as leaders and stakeholders in the primary and secondary health projects, its members would remain proactive and would not be silent as regard the impending doom in the state health care system.

The statement reads, “For the sake of the innocent people of Ekiti State, who unfortunately are at the receiving end, there is need to set the record straight and clarify issues as they relate to the industrial action embarked upon by NAGGMDP.

“While we have been careful and decorous on this issue, as people of the noble profession of medicine, we are taken aback by the response of government to our press conference, details of which contain easily verifiable facts.

“Our October 2019 position paper contained majorly all the issues that form the basis for this current struggle.

“That position paper alone should ordinarily have triggered a serious response from government, but unfortunately nothing came out of it for well over 9 months.

“We did everything within our reach in the build-up to this over four weeks industrial action to get government into considering and yielding to our demands, all to no avail.

“At this point in time, taking the decision on industrial action to save the primary and secondary health care from total collapse in Ekiti State is not only a moral burden on us, but also a clarion call.

“In our press conference, the statistics we gave were for doctors on the field in our primary and secondary health facilities.

“For the avoidance of doubt, at the primary health care level, there are a total of seven doctors working in 131 health centres.

“Government’s claim that it has in it employ over 300 doctors and cumulatively 700 doctors in Ekiti State is an obvious digression from the point.

“What the press release by government has done is to validate our claims that the primary and secondary levels of care are suffering an obvious neglect.”

The medical personnel therefore appeal to respected sons and daughters as well as other stakeholders in the medical sector to advise government to address the main issues and stop digressing from the truth and feeding the people of the state with lies and save the sector from total collapse.