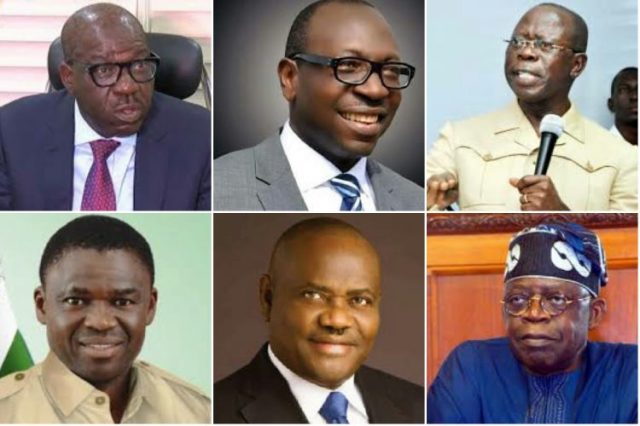 The ruling Peoples Democratic Party, PDP; All Progressive Congress, APC; African Democratic Congress, ADC; and 11 other political parties will participate in the election, which has caught the attention of the whole nation.

Though 14 candidates are featuring in the election, political analysts and watchers of political events in the country believe that the race could be narrowed down to two candidates, the incumbent governor and candidate of the PDP, Godwin Obaseki; and former Secretary to the Edo State Government and APC candidate, Osagie Ize-Iyamu.

Another person that has a huge stake in the election, which will take place in all the 18 local government areas of the state is the former governor of the state and immediate past National Chairman of the APC, Adams Oshiomhole, who is fully backing Ize-Iyamu against his estranged godson, Obaseki.

Obaseki, who was supported by Oshiomhole in 2016, was elected on the platform of the APC, but dumped the party for the PDP, following his disqualification from the APC primary election in June this year.

Political analysts therefore see this election as one that will determine the relevance or otherwise of godfatherism in Nigerian politics.

To them, if Obaseki defeats Ize-Iyamu, it will be another reinforcement of the demystification of political godfathers as was successfully done in Akwa Ibom in 2019, when Governor Emmanuel Udom refused to follow his estranged godfather, Godswill Akpabio, to the APC from the PDP, but still won the governorship election. He defeated the candidate of the APC and thus destroyed once and for all the invincibility of Akpabio in Akwa Ibom politics.

Threat Of Violence
One major feature of the political campaigns in Edo State in the last weeks has been violent attacks and threats of violence. It got to a head when the Independent National Electoral Commission, INEC, threatened to postpone the election if the political gladiators refused to sheath their swords and eschew violence.

The Edo State House of Assembly has also been embroiled in crisis of late, with the different political camps trying to outdo one another.

As a way of dousing tension and assuring the Edo electorate that they would be allowed to carry out their civic duty of electing the candidate of their choice, the Oba of Benin, Ewuare 11, on September 2, 2020, met with the two leading candidates in the election – Obaseki and Ize-Iyamu – in his palace. The Oba said he called the meeting to ensure the relaxation of the tensed atmosphere in the state.

He warned the two major candidates, as well as their supporters, that the political temperature in the state was heating up, with players engaging in verbal attacks, and counselled that the atmosphere in the state must be returned to its peaceful nature.

The National Peace Committee, led by former Head of State, Abdulslaam Abubakar, had also, this week, organised a peace accord, which was signed by all the 14 candidates and had in attendance the INEC Chairman, Mahmood Yakubu; and the Deputy Inspector General of Police, Leye Oyebade, who is heading the Police operations at the election.

With the signing of the peace accord, the leader of the NPC, General Abubakar, assured the residents of Edo State that the election would hold without violence.

Tinubu’s Broadcast
The National Leader of the APC, Bola Tinubu, earlier in the this, released a video attacking Governor Obaseki of Edo State.

Tinubu, in the sponsored broadcast, aired on TVC on Tuesday, called on Edo residents to vote out Obaseki and the PDP in Saturday’s election.

He said, “I want to appeal to you to reject Godwin Obaseki in this coming election. I have suffered with many others to bring about this democratic regime that today we are enjoying in the country.

“Then, Godwin Obaseki didn’t participate in any aspect of the struggle to enshrine democracy in the country. Therefore, he could not understand the value and the pains associated with this democratic struggle.

“He does not deserve any democratic ballot paper. Don’t vote for him, I appeal to all of you.”

Tinubu also accused Obaseki of using his office to impede over 14 Assembly members from performing their constitutional duties.

He alleged, “He (Obaseki) demonstrated the act of dictatorship, lack of respect for rule of law, lack of respect for you, the people who voted for those legislators prevented from being sworn-in. Today, he now comes back as a democrat wanting you to vote for him. Please, I appeal to you, reject him.

“Several institutions and leaders of our country appealed to him to respect constitutional democracy but he rejected all entreaties. He rejected the appeal of the National Assembly. When the Attorney-General of the Federal Republic of Nigeria enumerated the path of honour and the constitution of the country.”

In his response, the Edo governor pledged to help end godfatherism in Edo and Lagos states.

This also drew reactions from various PDP leaders who condemned Tinubu over the broadcast.

A chieftain of the PDP, Tom Ikimi responded by chiding Tinubu, saying he could not sit down in Lagos and determine who the Edo people would vote on Saturday.

Also, former Deputy National Chairman of the PDP, Olabode George, countered Tinubu, saying, “Obaseki is a good man with a kind heart, who has devoted the last four years to the service of the good people of Edo State, with total selflessness.

“Godwin Obaseki is humble, a democrat, a bridge-builder, a go-getter, who is not deterred by the tantrums and the shenanigans of little men who go about trying to distort his image and his incredible achievements in Edo.”

He said, “Tinubu’s broadcast is not positive to Ize-Iyamu’s campaign. It has made many Edo people to see Ize-Iyamu as Tinubu’s surrogate and they have vowed not to tie their destiny to Lagos. So, instead of boosting the chances of APC and Ize-Iyamu, Tinubu through the broadcast has done more damage.”

Ize-Iyamu, Obasekis Chances
Analysts believe the two candidates – Obaseki of the PDP and Ize-Iyamu of the APC – are going into Saturday’s election head to head.

They believe that the race towards the Edo State Government House may be too close to call and a tighter race than most people are imagining.

Obaseki and Ize-Iyamu are from this senatorial district. Both candidates are expected to share the votes from this zone as both are prominent sons of Benin.

This zone has the highest number of registered voters and whosoever has an edge here between Obaseki and Ize-Iyamu may be moving nearer to Edo Government House. This is also seen as a potential flash point area.

Edo Central
This zone is PDP’s traditional stronghold, and it remains a good ground for the party.

The zone, according to the rotation convention in Edo State politics, is set to produce the next governor. To them therefore, voting Obaseki who is on a second term, will quicken their aspiration more than voting Ize-Iyamu who may want to govern for two terms of eight years.

Analysts therefore opine that Obaseki may carry the day in Edo Central.

Edo North
This is a flashpoint and one place where security should be put on the alert. Oshiomhole and the APC guber cnadid see the running mate, Gani Audu, are from here.

On the part of the PDP, the Deputy Governor, Phillip Shaibu; and Media magnate, Raymond Dokpesi, are also from Edo North.

This will be a battle ground as both Oshiomhole and Shaibu would be desperate to win this zone to justify who is more on ground.

Oshiomhole has a lot to fight for in this election and he will find his match in Shaibu, a former students union leader and grassroot mobiliser.

Analystsa Views
Political analysts believe the election may be a major test for INEC after the 2019 general elections and they believe that the electoral umpire should write its name in gold.

They also believe it will be a hard test for the security agencies, as the potential for violence during and after the election is staring everybody in the face.

Human Rights and pro-democracy activist, Adeola Soetan, said that the Edo election would be a do-or-die battle, adding, “It will follow the ‘Tatata’ political violence and banditry like that of Kog State.

“Politics is a do-or-die battle in Nigeria, so INEC should be prepared to conduct a war. Since INEC is not trained in conducting and monitoring warfare, then the election may be won by a party that has greater war chest and armed warriors.

“Only if the electorate are determined to come out enmasse, vote for their choice and be very ready to defend their votes can the elections be free and fair.”

Also speaking on the election, with, Sola Olawale, a member of the Campaign for Democracy, CD, said that the Edo gubernatorial election was one that must not be allowed to follow the path of Kogi State.

He said, “Both the security agencies and INEC must put up their best. It is an election that is being monitored throughout the world, because of the level of violence that trail the campaigns.

“The security agencies and INEC should strive hard to ensure that the election is free and fair and people are allowed to make free choice.”

How true this is will be known in the next 24 hours.

•Culled from The Point