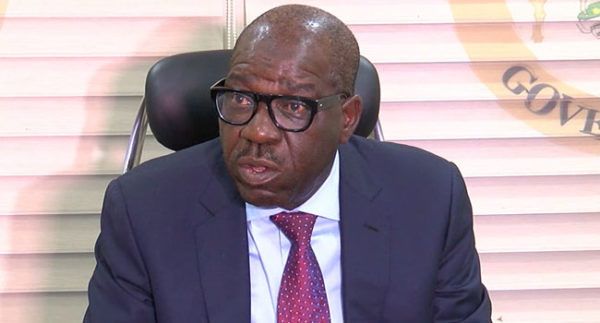 The reelection bid of the Edo State governor, Mr. Godwin Obaseki, got a major boost as the Youth Leader of the All Progressives Congress, APC, in Otuo Ward 9, Owan East Local Government Area of Edo State, Barr. Emma Egbeido, led over 2,500 members of the APC to defect to the Peoples Democratic Party, PDP, ahead of the September 19, 2020 gubernatorial election in the state.

Egbeido and his followers, who were received by Obaseki, the PDP candidate in the forthcoming election, declared their support for the governor’s second term bid, citing successes recorded by the administration in all sectors of the state.

Egbeido said, “Nobody can convince me not to follow Governor Obaseki. Even the blind can see his developmental strides across the 18 local government areas of the state.

“I am not here to announce his developmental strides to us, because they are there for everyone to see; his people nicknamed him ‘the wake and see governor,’ because of the way which he has delivered his campaign promises in the first term.

“You sleep, wake and see that your roads are tarred the next morning. He will continue to be the governor of this great state in the next four years.”

Obaseki also received a retired CSP, Stephen Iriabjeh, in Ward 9 and Oje Ehire in Ward 8, from the APC to PDP, as both decampees assured the governor of their full support in the forthcoming election.

Commending the people of Ward 8 and Ward 9 for their massive turn out, the governor said, “Four years ago, when I was sworn-in as the governor of this state, our agreement was to go and work for the interest of the common man, but some people want me to be under their control.

“They roped a stone on my leg, but even with the stone, I was able to do so much for my people. By the time I am totally free from them, I promise to bring more developmental projects to my people.

“I can see electricity poles everywhere and we still don’t have light, because some people are benefiting from the current state of darkness. But I understand the electricity politics.

“I will replicate what I am doing about electricity in Benin in all parts of the state in my second term in office as the governor of our state.

“I have equipped the General Hospital in Otuo and directed that available nurses and doctors be posted to the hospital. I want the hospital to commence operation before my election.”

He therefore called on the electorate to come out in their large numbers and vote for him in the forthcoming gubernatorial election.