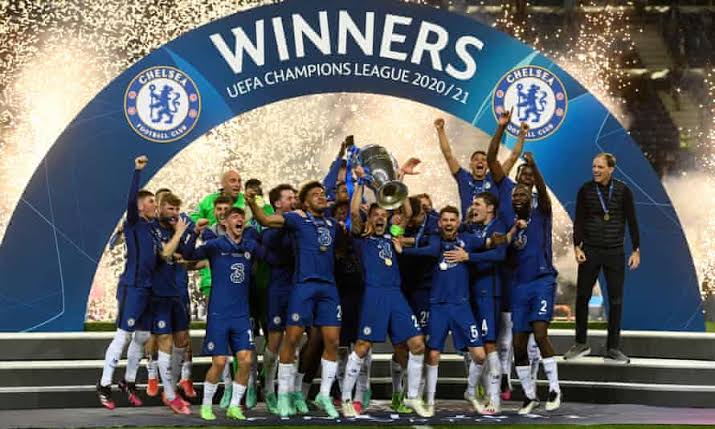 ’Twas a spectacle with all the trappings of a full-fledged drama: conflict, timing, tension, rhythm, mood, language, sound, space, focus, contrast and a crushing climax. ’Twas the UEFA Champions League final, played before 50,035 spectators on a 115x68m stage called Dragon Stadium in Porto, Portugal’s second largest city after Lisbon. Believe you me, the dragons that emerged within the stadium and afflicted the Manchester team won’t be exorcised too soon.

It’s not only art that imitates life, sports do, too. And many a time, life, in its fitful drama, offers grapes instead of oranges and waxes bile instead of honey.

For me, the outcome of the impending UEFA finale was as sure as death. Lightning doesn’t strike at the same spot twice. Eewo orisa! Impossible abomination! But I was soon to discover the futility of this age-long belief, even as science has proved that lightning strikes the 102-storey Empire State Building in Manhattan, New York, about 25 times every year.

I had it all figured out, or so I thought. I had cast some catchy headlines and thought up some super storyline with twists and turns leading to the ultimate triumph of Manchester City FC in the UEFA final.

But life is quicksand; after Chelsea’s lightning had struck Manchester City twice in England, it travelled an air distance of 1,812 kilometers to Portugal and struck City for the third time in six weeks! Chelsea FC put a grenade to my personal pot of fantasy and shattered the initial layout of this article. Ha! How do I beat my deadline?

Usually, I write my column on Saturday morning but I delayed it till Saturday night – after the epic final – just to accommodate Manchester City’s anticipatory victory, hoping to use the triumph to rile my known and unknown football frenemies, who cut across countries and continents, online and offline.

In England, for instance, I dislike Chelsea FC with passion and long draped it in the garb of an archenemy while in Spain, where I support the club that plays football like angels, FC Barcelona, my archfoe is (un)Real Madrid FC, which I do not dislike but hate for their dominance.

When Chelsea came up against Madrid in the semifinals of the competition, I supported the London club but I silently prayed it never get past Manchester City in the finals.

Worldwide, tit-for-tat aka ‘gbas gbos’ is the language spoken in football fandom, where revenge is never cold, but served hot like the pounded yam of 20 years.

In Porto, on Saturday, Chelsea’s cunning coach, Thomas Tuchel, exacted another pound of flesh from the greatest coach in club football today, Pep Guardiola, who had peppered Tuchel four times while they both coached Bayern Munich and Borussia Dortmund respectively.

Before the UCL final, Guardiola had only lost in one of the 15 finals in his career while Tuchel had lost in his two finals only to come back a year later and win both titles.

The mantra among Nigerian football supporters is ‘the enemy of my friend is my enemy’, and inter-club banters could spring from trivias such as jersey colour or coach’s height, reinforcing the proverb which says an enemy never kills a big grasscutter, ‘ota eni kii pa odu oya’.

To understand football fans’ psychology, a peep into Nigerian politics or polygamy will suffice. Except suspicion, envy and rivalry, nothing is cast in concrete in Nigerian politics or a typical polygamous home. What is sauce for the goose is never sauce for the gander: rules change like quicksilver, depending on the idiosyncrasies of who is at the driver and the convenience of the seat.

For me, May is a month I won two battles but lost the war. One, my preferred team, Leicester defeated Chelsea 0-1 in the final of the English FA Cup. Two, Villareal, a Spanish team, defeated Manchester United in the final of the Europa League final 10-11 on penalties, but the biggest prize of all was lost to Chelsea’s never-say-die spirit and Guardiola’s oversabi which is turning into an albatross over the years.

I’m still in shock as to why Guardiola, like it’s now becoming common to him in the knockout stages of the UCL to come up with questionable line-ups, decided to play without a natural striker and a defensive midfielder on the biggest stage of club football, and Chelsea punished his indiscretion when a Mason Mount intelligent pass split open City’s defence through the very middle for Kai Havertz to maroon goalkeeper Ederson Moraes, scoring the only goal of the match.

Today, I neither intend to bemoan the twin bombs dropped on the city of Manchester by Villareal and Chelsea within three days apart, nor do I intend to count the countless teeth of Adepele, the hyperdontia that Nigeria’s political class has become.

Now that the hurlyburly’s done and the battle is won and lost, Chelsea, worthy Champions of Europe, deserve their time in the sun for ‘Blue is the colour, football is the game’.

I doff my hat for Chelsea, whose fans, britannica.com describes as one of ‘England’s most notorious gangs of football hooligans known as Headhunters’, and ‘have been responsible for organised violence in the stands since the 1970s’.

But as the euphoria of victory and the bitterness of defeat ebb, I guess it’s also time the Nigerian leadership looks in the mirror and takes lessons from the Chelsea triumph.

I wish Nigerian President, Major General Muhammadu Buhari (retd.) and his deputy, Yemi Osinbajo, watched the match. I don’t give a hoot if they oohed or aahed during the match. All I care about is that they both did not lose the lessons inherent in the Chelsea victory.

I also wish the President of the Senate, Ahmed Lawan, his deputy, Ovie Omo-Agege, and the leadership of the House of Representatives – all watched the match, and not lose sight of the lessons in the exemplary leadership of Tuchel, who took Chelsea from the ninth position in January this year to the pinnacle of club football four months later.

Tuchel, unlike the Buhari-Osinbajo-led government, didn’t whine about the players he inherited from Chelsea’s former coach, Frank Lampard, but settled down to work and turned an average team to Europe’s best.

I wish Nigerian political leaders at all levels saw the economic stupidity in our love for foreign football and truly develop our local leagues to partake in the multi billion dollars venture football has become globally.

As I said early on, this article is a salute to Chelsea’s indomitable spirit, and not a criticism of the inept Buhari-Osinbajo government. Tuchel picked the best available legs for every game. He wasn’t nepotistic like the Buhari-Osinbajo rudderless government, which has never criticised killings by suspected Fulani herdsmen across the country.

Tuchel understands the burden of leadership. He knows the goals of the board and the expectation of the club’s teeming supporters worldwide, and he rose to the occasion by constantly communicating with his players, never absented himself at critical moments, demonstrating compassion, exuding confidence and building trust – virtues lacking in the Buhari-Osinbajo government.

May was a month of Chelsea triumph. It was also a month when Nigeria’s Defence Minister, Bashir Magashi, delivered a ‘heartless’ speech at the funeral of former COAS, Lt.-Gen Ibrahim Attahiru. May was the month when the new ‘Aide-de-Camp’ to the Aide-De-Camp of Governor Nasir El-Rufai was unveiled and the incoming First Lady got into a fresh ‘thug’ of war.

May was the month when the parents of kidnapped Greenfield University students paid N180 million and bought many motorcycles to secure the release of their children from kidnappers.

May Buhari and Osinbajo take the lessons of Chelsea victory beyond May.

•Odesola, a journalist, writes from the United States of America and can be reached via: Email: tundeodes2003@yahoo.com; Facebook: @tunde odesola; and
Twitter: @tunde_odesola

Between The Devil And The Deep Blue Sea