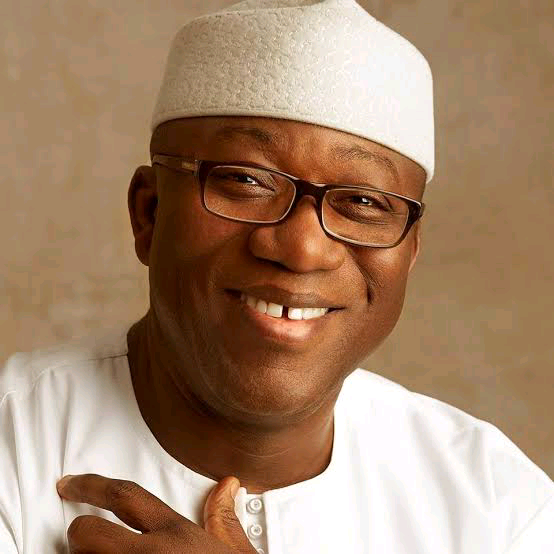 If you are at the top, you’d certainly become the topic.

The above saying goes well for the persona of Dr. John Kayode Fayemi, which has attracted both the positive and negative attentions as the governor of Ekiti State and Chairman of Nigeria Governors’ Forum, NGF.

Fayemi has carried out his assignments with so much gusto that one begins to question the source of his energy and wisdom. In Ekiti, evidences of his turnaround performance are there to see. As the NGF Chair, his bridge-building, leadership candour is legendary.

These days, a week hardly passes without Fayemi being brought to the public domain. For or against, he is the _go to_ man and he is often viewed through the lens of the modern-day leading and leadership challenges.

So many stories have continued to litter the public space in spite of the governor, more out of fear of his soaring, steady stature than what he isn’t doing well. Stories that appeal to human sensibilities, that draw criticisms that someone in Fayemi’s shoes should ordinarily confirm or disclaim the insinuations therein. But Fayemi is not one to be easily fazed. He would rather greet them with equanimity, which again is taken for taciturnity. This makes people to see him in different lights. Some see him as snobby; some see him as naturally quiet, or just simply shy, while some see him as a deep thinker with little time for such “petty” issues.

Fayemi is a typical example of what leadership is and what it means. Considering the depth of his understanding of national issues, he has justifiably become a major topic of concern in today’s Nigeria. He does not shy away from taking responsibilities; neither does he embark on any blame game. He keeps giving talks bordering on the process of reconstruction and development, in various dimensions, of Nigeria as a nation and development of Nigerians as individuals.

Even in trying and changing times, Fayemi is mentally strong and not the one to lose sight of his core values. In times of adversity like the one the country is going through at the moment, due to the ravaging global pandemic, he is proving himself to be a strong source of strength, resolve and perspective to the country. Those around him would readily confirm him as one who would always resist pummeling himself with disempowering self-talk, let alone others. Rather than falling into the trap of comparison or seeking external validation, Fayemi is very authentic with everything he does. He is not known for engaging in a popularity contest either.

Fayemi has written several books on governance and democratisation, civil-military relations and security sector issues in Africa. Among his recent books are: Deepening the Culture of Constitutionalism: The Role of Regional Institutions in Constitutional Development in Africa (CDD, 2003); Security Sector Governance in Africa: A Handbook (edited with Nicole Ball, CDD, 2004) and Out of the Shadows: Exile and the Struggle for Freedom and Democracy in Nigeria (CDD, 2005).

One then wonders why several untrue things are being said about this open-book personality. It is absolutely untrue and a beer-parlour gist that Fayemi was a political neophyte and an obscure person as at 2007, when he entered the ring to contest the Ekiti gubernatorial election. This is without denying the fact that the election was his first. It is also a fable that he got introduced to Ekiti politics by Asiwaju Bola Ahmed Tinubu. He wouldn’t have, considering the permutations and arrangements of the period, which vested the power to select a successor in the immediate past governor who doubled as the leader of the party in each of the states.

Take for instance; late Isiaka Abiola Ajimobi was already a serving senator in Alliance for Democracy, AD, in 2007. Adebayo Adewusi, was Finance Commissioner to Tinubu as Lagos State governor. Both Ajimobi and Adewusi contested as gubernatorial aspirants in Oyo State, and indeed were the two leading aspirants, ably backed by Tinubu. Yet neither of them got the ticket, because it was the erstwhile Alhaji Lam Adesina’s to give, and he gave it to neither.

In Ogun, in spite of Tinubu’s support, it wasn’t until Segun Osoba finally conceded to the candidacy of Senator Ibikunle Amosun that the latter could get the ticket. Even then, Amosun had to pair with Segun Adesegun, an Osoba man. In Osun, Tinubu was able to sell Ogbeni Rauf Aregbesola to Chief Akande and the latter bought it. This means that had Tinubu wanted any other person to emerge as the candidate of the party in in Ekiti in 2007, he would not have had his way, except Otunba Niyi Adebayo had agreed. It is clear from the above that Fayemi was Adebayo’s candidate. This, however, is not to discount Tinubu’s primus inter pares’ role in the progressives and there is no denying that he put this to extensive use in his support of Fayemi’s gubernatorial project in Ekiti State.

Tinubu and Fayemi had also worked together on the pro-democracy project while in exile in the UK. So, again, the perception that Fayemi was introduced to Tinubu by anyone was false. Fayemi was not dragged through the nose into Ekiti politics by those claiming to have done so. If anyone would be credited with bringing Fayemi to Ekiti to contest, such credit should go to Otunba Adebayo, who had had such thought of inviting Fayemi into his cabinet as far back as 2003, when the former was anticipating a second term. Though Fayemi made a loud entry into competitive politics by contesting for governor of Ekiti State, his final victory did not come until after three and a half years, fighting through the legal system, and his victory was pronounced on 15 October, 2010, by the Appeal Court sitting in Kwara State.

Another fallacy is the unsubstantiated story of Fayemi ever lecturing in Ghana or floating a university in the neighbouring country. Nothing of such ever happened. They are both conjectures. Rather, Fayemi lectured in the United Kingdom, at the Kings College, London. He also lectured at the United States at the Northwestern University.

Prior to joining politics, Fayemi had lectured in Africa, Europe, the Americas and Asia. He had also served as an adviser on transitional justice, regional integration, constitutionalism, security sector reform and civil-military relations issues to various governments, inter-governmental institutions and development agencies. He was the main technical adviser to Nigeria’s Human Rights Violations Investigation Commission (Oputa Panel), which investigated past abuses.

Fayemi also served on the Presidential Implementation Committees on Security Sector Reform, NEPAD and the Millennium Development Goals. He was technical expert to the Economic Community of West African States, ECOWAS, on small arms and light weapons and United Nations Economic Commission for Africa on governance issues. At other times Fayemi served as a consultant to the OECD on Security Sector Reform and chaired the Commonwealth Human Rights Initiative’s Committee of Experts on developing guiding principles and mechanisms of constitution making in Commonwealth Africa.

Prior to his getting elected as the governor of Ekiti for a second term in 2018, Fayemi was the country’s honourable Minister of Mines and Steel Development.

Oftentimes, when Fayemi dissects an issue, he would address the causal responsibility, focusing on the origins of the issue, and at the same time give it a treatment responsibility, focusing on how the issue can be alleviated. He has never shied away from laying the responsibilities at the doorstep of the leaders, whereas he is one. To him, governance is not just an organ of government, but the engine that propels the smooth run of government. He would argue that it is the structures and process that ensure accountability, transparency, responsiveness, empowerment and broad based participation.

Fayemi represents the future of Nigeria, with a futuristic vision and knowing how to turn ideas into real-world success stories.

Having found himself in the middle of the nuances of leading in crisis moments, Fayemi has not shied away from doing so. Rather, he has consistently displayed rare leadership virtues in handling crisis of monumental proportion to the chagrin of his everyone.

Ekiti, nay Nigeria at large, is extremely lucky to have a person like Dr. John Kayode Fayemi, CON, in the leadership fray at this challenging period, as he, Fayemi, turns 56 on February 9, 2021.

Happy Birthday to the phenomenal politician. Surely, there are still more wins ahead.