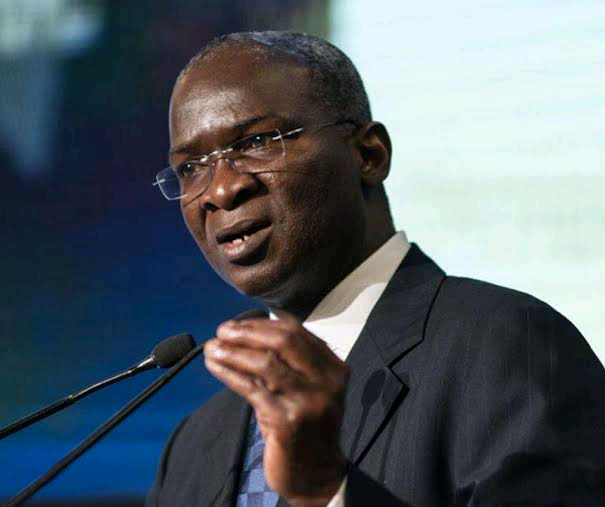 A non-governmental organization, NGO, the Royal Peoples Platform, RPP, has commended the Minister of Works and Housing, Mr Babatunde Raji Fashola, SAN, for his explanation on why the Buhari administration is borrowing.

Fashola, while fielding questions from an anchor woman during an interview on BBC Yoruba channel, convincingly explained the need for taking loans and borrowing, particularly for the sake of development of infrastructure; asserting that the available infrastructure in the country presently is not even sufficient for the citizenry, let alone be adequate for the future generation.

RPP boss, Prince Dare Aladekoba, in a media chat in Ilorin on Tuesday, expressed the need for government functionaries to emulate Fashola in bringing to the knowledge of the populace reasons for government’s actions, saying such would facilitate more cordial government/citizens relationship.

Aladekoba averred that the mutual suspicion, between government nad the governed and the lack of confidence by the citizenry in the authority breed loss of interest in whatever the government does, saying, “If explanations are offered on all government steps taken to serve the people, mutual understanding and support would be encouraged.”

Aladekoba, who describe Fashola’s explanation on air as apt and satisfactory, is of the conviction that if other ministers and government officials make it an attitude to carry the people along in whatever the government does, people would be encouraged to flow along with it, saying that that is the essence of democracy, which he reminded is the government of the people for the people and by the people.

The NGO leader said that Fashola, in a robust manner, has succeeded in winning more fans for the Buhari administration and lay the ground for more participation of the people in Buhari’s administration, insisting that only government of inclusiveness can win the people’s confidence and ginger them to assist, support and cooperate with the administration through beneficial suggestions and constructive observation.

In the interview, Fashola made it clear that it is the government that is borrowing and not President Muhammadu Buhari, to achieve desire to develop the infrastructure of the nation to the enviable height of global standard, adding that, the President desires to leave the country better than he met it in 2015.

While reminding that development of vital infrastructure is a sure route to develop a nation, Fashola asserted that the best way to prepare a comfortable future for the future generation is putting in place durable infrastructure for them to enjoy, assuring that that is exactly what the current administration is doing under the leadership of a visionary leader, Buhari.

Aladekoba added that, President Buhari deserves commendation for not adding extra burden to the plight of the citizenry through heavy taxes, saying that the essence of carrying the people along the way Fashola did in the interview is that it would go a long way to intimate the populace of the genuine concern of the authority for the people.

The impressed activist said it is exciting to know that even the United States of America is also owing up to $23 trillion, agreeing with Fashola that if the borrowing is for judicious spending on the infrastructure, the borrowing is therefore worth it.