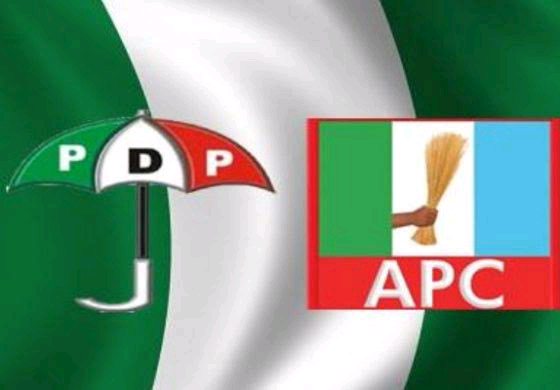 On the opposite side of Ass-o-Rock lies a stagnant, stinking body of water. Once a river of clear water, but the tidal waves of corruption, greed, ego and selfishness have killed virtually all the aquatic creatures therein, making it almost as dead as the Dead Sea. The stinking lagoon is the heritage of the Peoples Dehumanising Party, aka Pin-Di-Pi.

The sun turns its furnace on the dark water. An electric current of excitement buzzes through the half-naked Pin-Di-Pi fishermen inside the lagoon. They’re in the water with their nets and gourds, each hoping to catch the biggest fish, and be crowned the Lord of the River for the next four years, ultimately. Unlike the Argungu fishing festival of the illustrious people of Kebbi State, which promotes the ‘fish and let fish’ dictum, selfishness is a virtue among the leading PDP fishermen, whose carol is ‘fish alone, chop alone.’

The PDP fishermen know they have great adversaries in their All Promises Cancelled, APC, rivals who are in the last year of a cursed tenure.

Like the angling PDP fishermen looking for the biggest fish, APC hunters have also surrounded the anthill in front of Ass-o-Rock, hunting to kill the biggest game and earn another four years of extended havoc. A context between the best fisherman and the best hunter may decide who controls the air, land and water in the next four years, eventually.

Clutching a megaphone on the bank of the water, Pin-Di-Pi’s National Chairman gives a pep talk to contestants.

Chairman: Ladies and gentlemen, you’re all welcome to this crucial fishing contest which determines who will represent our great party, Pin-Di-Pi, in the 2023 festival of electoral violence and killings to be conducted by I-Neck. As you all know, disunity has been the bane of our great party nationwide. I urge all and sundry to imbibe unity and peace as we seek to dislodge the most corrupt party in the history of democracy, the APC.

(A round of applause greets the chairman’s speech)

Chairman: Before the fishing contest commences in earnest, I’ll give journalists a few minutes to ask contestants questions. Gentlemen of the press, please, make your questions brief; we can’t leave these gentlemen in the water for too long.

PUNCH: Alhaji ARTICUlate, my question isn’t about the over $180 million Halliburton scandal. You’re in this competition for a record sixth time, which probably suggests a measure of your consistency and passion to develop Nigeria, right?

PUNCH: Did patriotism push you to pull down your initial post which condemned the killing of Deborah?

ARTICUlate: May your loyalty never be tested. After I made that post, I saw millions of hungry and homeless almajiri youths turn their backs and votes on me. At 75, this may be my last shot. Deborah will understand wherever she is. She wants a better Nigeria. I pulled the post down in her own interest; I’ll get her a better Nigeria.

Nation: Mr OB of Anambra, can you relate your avowed integrity with the stinking Pandora Papers scandal which fingered you as having undeclared funds in tax havens abroad?

OB: (Sounding like a malfunctioning Highlife disc) I didn’t declare in my asset declaration form with the Code of Conduct Bureau, the companies, funds and properties unearthed in the scandal because I didn’t know I should have done so.

Nation: Mr Integrity, do you know that’s the height of corruption?

Nation: You acquired these foreign companies and properties four years after your state rulership.

Nation: Is there a connection between state funds and the companies?

OB: Mr National Chairman, the water is getting too uncomfortable for me. I’m drowning, I want to go home.

DisDay: It appears your finger is in every crisis besetting Pin-di-Pi.

Wkay: Me, I always talk true. Person run come meet us after APC push am comot dem house, I follow accept you for PDP, I follow support you for election, you win election finish, you come show your ungratefulness, me I no go take dat.

DisDay: But the governor only advised you not to allow your presidential ambition to tear the party apart.

Vanguard: My question is for the Wrecker Extraordinaire of Societe Bank: Many Nigerians still hold you responsible for Societe bank’s collapse and their trapped funds in it.

Wrecker: Old things have passed away.

Tribune: Mr National Chairman, this question is for you: Former Shoeless President should be fishing in this water, and not at the anthill…

Chairman: Now, he has shoes for his shoelessness, but still never has a clue for his cluelessness.

(A loud noise is heard from the Ass-o-Rock end where APC aspirants are hunting for the biggest game. Gunshots and shouting. The scene shifts to the anthill.)

Pastor Trade-Money: The kingdom of God suffereth violence and the violent taketh it by force. I’ll not step down!

Bullion Van: Nobody is asking you to step down! I trained you in politics, I’m your master; I’ll show you that the teeth are sharper than razor!

Pastor Trade-Money: No weapon fashioned against me shall prosper!

Bullion Van: No one is fashioning any weapon against you! The Lion of Bourdillon won’t allow the crown to fall off its head, eewo!

Pastor Trade-Money: The Lord is my shepherd!

Bullion Van: Did the Lord tell you to be sharing money? Do you think Nigerians don’t know?

Bullion Van: Know that we all lift the lid from the till and help ourselves? You think Nigerians are foolish? Nigerians are just peaceful people who don’t care inasmuch as you give them the bare necessities of life.

Pastor Trade-Money: I’m not a thief!

Bullion Van: (Laughs) I know what we did together. As a master of the game, I knew what you were up to when you were using the Trade-Money scheme to ingratiate yourself with the masses. It can’t work because you have no structure.

Bullion Van: I caught it first!

Pastor Trade-Money: No, I caught it.

(More gunshots and wailing. After some time, martial music comes on air. Silence everywhere. Deborah sobs in the background.)

Deborah: They shamelessly buy election forms for N100 million and leave millions untrained. Today, I’m a victim; yesterday, there were victims; tomorrow, there will be victims. To light up their world and keep warm, they feed the masses as logs to their furnace. Nigerians, nothing good will ever come out from the hunters or the fishermen because they are all vampires. Until the country is restructured along the paths of equity and justice, Nigeria will remain a hell.