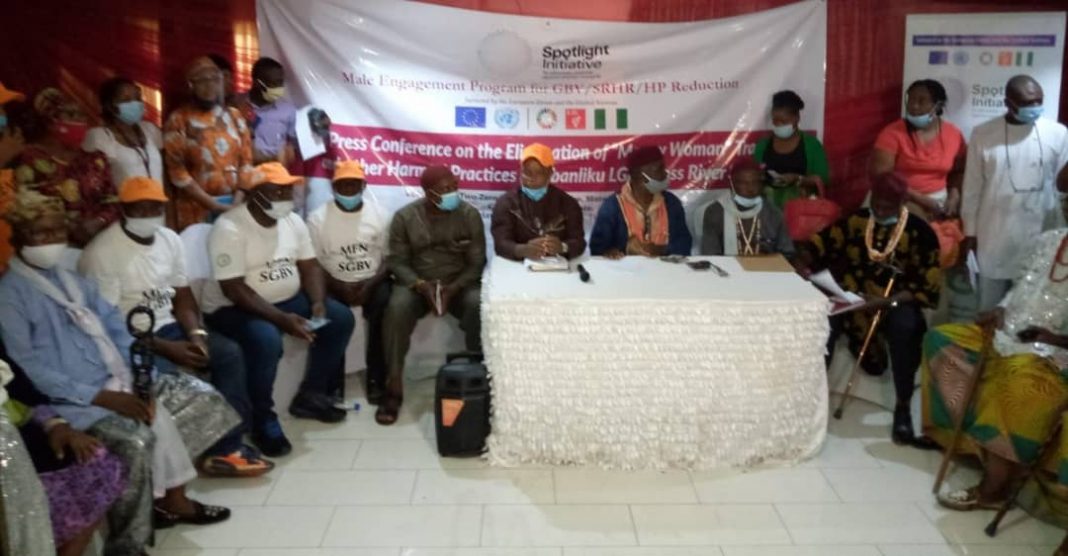 The paramount ruler of Obanliku in Obanlikwu Local Government Area of Cross River State Northern senatorial district, His Royal Highness, Uchua Amos, has given reasons why the council of traditional chiefs in his kingdom resolved to outlaw an age long tradition called “money woman marriage,” which he described as archaic and savage.

The monarch gave the reasons while fielding questions from journalists at the end of media briefing organized by the African Centre for Leadership, Strategy and Development, Centre LSD, alongside the Spotlight Initiative in partnership with the European Union and the United Nations in Calabar.

Money woman tradition is one practice where an underage girl is traded for money and commodity by the parents and upon her birth serves as a slave for life.

At that instance the underage girl would have no option than to succumb to the whimps and caprices of her parents in as much as marriage is concerned, with no need to acquiring western education and bound to live with her aged husband who paid for her, even when she was in her mother’s womb.

In his words, the royal father said, “Our traditional societies have their values, norms, cultures in place, which was actually in tandem with their level of development.

“Today some of those practices like the ‘money woman’ are no longer obtainable, we don’t need them because they are barbaric.

“There is no need for such practice and we adopted a holistic approach, involving the traditional institution, religious, youths and the government.

“We all came together to end this practice and that is what we have done with the help of Spotlight Initiative and our partners.”

He added that with the abolition, fines will be imposed on any one or community that indulges in the practice, adding that massive enlightenment is being done to educate the people against going back to it.

In his earlier remarks, the Executive Director, Centre for Leadership, Strategy and Development, Centre LSD, Monday Osasah, averred that the initiative is aimed at supporting women and girls, who are most vulnerable, to assist them free themselves from whatever bondage brought unto them by parents, who may be tied to one or two barbaric and savage tradition which adds no value to their lives, but put them in perpetual misery till the end of their lives.

The traditional ruler maintained that the project which is in three local council areas of Calabar Municipality, Calabar South and Obanliku, in the state focuses its attention on interventions which go a long way to transform lives which hitherto had lived in misey to liberate those oppressed by harmful traditions.

In his earlier remarks, the Minister of Women Affairs, Pauline Tallen, who was represented by Victoria Lar, stressed that the Women Affairs Ministry would do everything to ensure that issues that tend to oppress women and girls are redressed without any hitch, promising to seek collaboration with stakeholders so that those oppressed can find liberation.

Also, the Coordinator of the United Nations’ Office, Yinka Akibu, in his remarks, stated that the UN is happy to be part of the fight against all harmful practices that subdues women and girls.