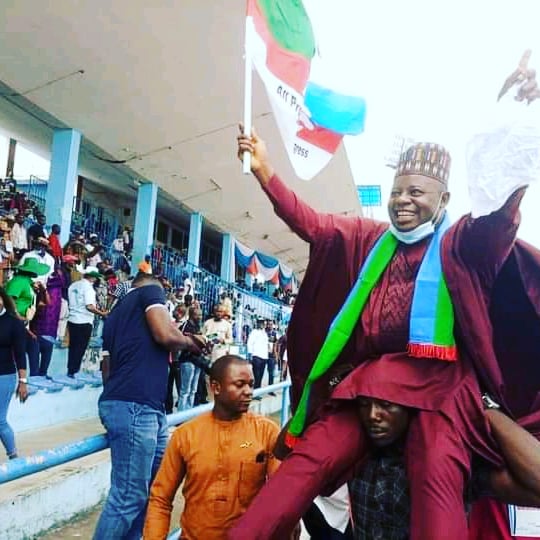 Former Director General, DG, Due Process and Intelligent Bureau in the Governor Ben Ayade-led administration, Barr. Alphonsus Ogar, a.k.a Okadigbo, has been elected as new chairman of the party to pillot its affairs in Cross River State.

Ogar was elected alongside his deputy,
Prince Eka Williams, an indigene of Cross River Central senatorial district to assist Ogar in running the affairs of the party.

Addressing party supporters and delegates to the congress after his emergence, Ogar promised not to betray the confidence reposed in him, stressing that as a political orphan, who hitherto had no one to speak for him until tlGovernor Ayade, who he described as his political father, came to his rescue. He further pledged not to toy with the privilege given to him.

He said, “Today we are plugging the 46KVA volt into the socket. My emergence is not to be a leader of the party, but a servant.

“Political evangelism commences today. The target is to win souls for the by-election in Ogoja. Our major assignment now is to ensure that we take over the Pregriegno House in 2023.

“APC has come to stay in Cross River State in the next 20 to 30 years. The only magic is love and unity.

“The victory you are seeing today is a generational shift of power. The only magic is love.”

Ogar stressed that what the people have seen is a generational shift of power from tbe old to the young brigade, promising to sustain this culture of power shift from the old to younger persons.

Speaking earlier, Chairman of the state Congress Committee, Alhaji Abubakar Malami, averred that the journey, which began in July has come to an end.

Also speaking, Senior Special Assistant, SSA, to Governor Ayade on Political Affairs, Chief Peter Ojie, while giving a break down of the total delegates present for the exercise, stated that 2,300 delegates across the 18 local government areas of the state from 196 political wards turned up for the congress; adding that five delegates were picked from each of the political wards of the state.

The congress came to an end via a concensus (voice vote) devoid of any rancour, acrimony or violence, with the delegates jubilating and chanting songs of victory, as if they just returned victoriously from a war front.

Ogun Set To Host $3b Refinery In Tongeji Island

14 Govs, 13 Ex-Govs, Others Met In Lagos For National Rebirth -Obaigbena