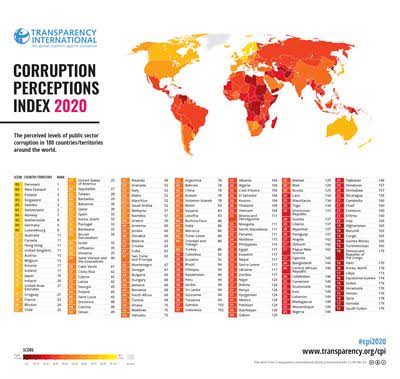 As most countries across the world failed to tackle corruption effectively in 2020, Nigeria has dropped from its 146th position in 2019 to 149th in the latest global ranking of public sector corruption, according to Transparency International.

Nigeria scored a total of 25 points on perceived levels of public sector corruption according to experts and businesspeople, one less than the 26 points scored in 2019.

The report noted that civil society organisations, CSOs, in Nigeria denounced reports of hoarding of COVID-19 palliatives by state governments and called on anti-corruption institutions to investigate the allegations.

Recall that mobs of people broke into handful of warehouses across the country in October, in the else of the national #EndSARS protest to loot palliative materials that had been stored by officials months, after the country went into lockdown and affected the economic fortunes of many Nigerians.

Recall also that a state lawmaker in Lagos State confessed that he had been keeping the looted palliative materials to distribute on his birthday, while other officials said they were storing the materials for an anticipated second wave.

Fighting corruption was one of the tripod on which President Muhammadu Buhari rode to powering 2015, but statistics show that he has made little progress in over five years.

It is noteworthy that the President suspended the acting chaian of the Economic and Financial Crimes Commission, EFCC, Ibrahim Magu,last year over numerous allegations of corruption.

However, the President is yet to act on the report of an investigative committee on the allegations.

This was just as the suspension was perceived as a major dent on the Buhari administration’s fight against corruption.

Recall that Buhari had stuck with Magu for years, even when the Senate twice refused to ratify his appointment, as a result of sundry allegations of corruption in his service history.

The CPI report noted that corruption is more pervasive in countries least equipped to handle the COVID-19 pandemic and other global crises.

It also showed that despite some progress globally, most countries still failed to tackle corruption effectively last year.

The report noted, “This year’s Corruption Perceptions Index, CPI, paints a grim picture of the state of corruption worldwide.

“While most countries have made little to no progress in tackling corruption in nearly a decade, more than two-thirds of countries score below 50.”

Leading the pack of the least cortupt countries in the world were Denmark and New Zealand, which jointly ranked number one with 88 points, followed by Finland, Singapore, Sweden, and Switzerland with 85 points apiece.

At the other end, South Sudan and Somalia ranked as the most corrupt in the world with 12 points apiece, followed by Syria with 14 points, and Yemen and Venezuela with 15 points apiece.

Yinka Odumakin: An Ode To The Fallen One