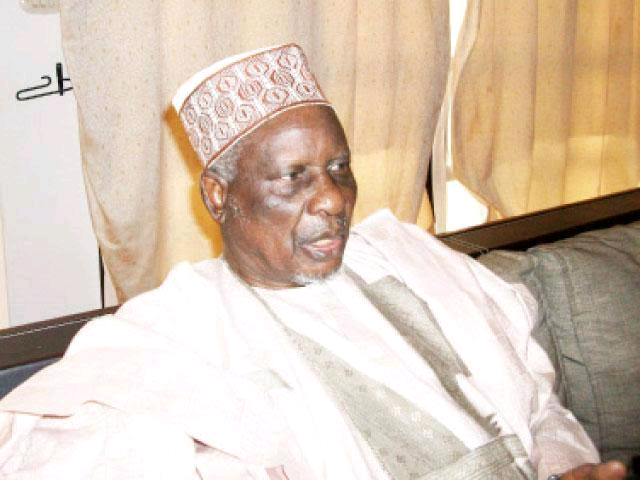 What is your reaction to the worsening security situation in the country?

We need to ensure there is cooperation between the Federal Government and the citizens. They need to cooperate and work out how to solve this problem. I believe the problem can be solved.

I know there is insecurity in the country, but then it has not overwhelmed the country. This is because despite the tension generated, many markets are still open and I see a lot of people going about their normal business undisturbed. I am not aware of any market being closed because of insecurity. But I have seen that all the 774 local government councils are working. The Federal Government itself and the states are still working. None of these institutions has stopped working because of the worsening security situation.

Nigeria is facing many challenges at the moment, no doubt. What we need right now is a synergy between the public and the government. We have no other country to go to. God has given this country great strength. We have the largest concentration of black people in the whole world. So, what we need to do is put our heads together and find a solution to this problem.

When you say Nigerians should put heads together, do you mean the government should organise a fresh national conference or national security summit?

I won’t support a fresh national conference. Why? Because I know there are people who don’t want this country to stay united. Although they are in the minority, they are pursuing that agenda with seriousness. Fortunately, they have not been able to take total control of the country. These same people have enjoyed and are still enjoying a lot of benefits from Nigeria, yet they are bent on destroying the country. They have gained so much from Nigeria, but are not willing to give back to the country.

Many of the things going on in Nigeria nowadays happened during the crisis in Rwanda. For example, the media in that country were inciting one tribe against another. Eventually, war broke out. The people started fighting one another. We had to go there to restore peace.

About half a million people in Rwanda lost their lives during the war. After the international community intervened, the people now realised the need to come together and work out solutions to their problems. I have heard that nowadays if you go to bed anywhere in Rwanda and you leave your doors open, nobody would enter your house. If you forget your handbag somewhere, either in a shop or in a bus, you will get it in the same place where you left it or at the nearest police station. We can create a similar situation in Nigeria.

The younger generation of Nigerians ought to be very careful. The future of this country belongs to them. I am talking about those in their 30s, 40s, even 50s, who still have about 50 years or more to live on earth. They are the people that are trying to foment trouble in the country. If they keep causing trouble, they certainly will not live the rest of their lives in peace. Nigeria is their only country. No other country will accept them when things really go wrong. No country in the world will be willing to accommodate 200 million people as refugees. So we better unite to restore sanity in our country.

How do we put heads together?

Unfortunately, the Muhammadu Buhari Administration has only two years left. The administration has spent six years doing what it thinks is the best, but its best has not been good enough for the country. My opinion is that government can make mistakes. If we had been patient with the leadership of the country in the First Republic and given them time, Nigeria would have been far developed.

In the future, no Nigeria should support the aspirations of any political party except it shows proof of concrete programmes. Political parties should come out with sound agenda on how to address the challenges facing this country. We should not support them until we are sure that they are capable of solving our problems.

We should not elect people because they happen to be from our tribe or we happen to like their faces or names. The basis for electing them should be their programmes. We should be sure they have what it takes to solve our collective problems. Then we could begin to think of how to restore sanity to the country. I can assure you that with prudence and hard work, we will be able to achieve peace, harmony and prosperity for Nigeria.

How do you assess President Muhammadu Buhari’s government?

I believe the Muhammadu Buhari administration is doing its best, but its best is not good enough for the country. That is my assessment.

President Buhari always talks about fighting Boko Haram. Of course, one of his campaign promises was to eradicate the Boko Haram insurgency. Unfortunately we are having more problems in the country. We now have the problem of kidnapping and ransom taking, among others. The problems have simply multiplied, yet the President has not been able to solve them and change this country for the better.

Some people believe that restructuring the country is the only way to solve these problems. Do you agree with this?

I am not impressed by those who are talking about restructuring. For over 20 years now, they have been talking of restructuring, but not one of them has come up with a programme of restructuring in Nigeria. Anybody who wants the country to be restructured should give us a plan on how to go about it.

Nigerians should not be carried away by mere sloganeering. We should demand that those calling for restructuring should come up with programmes good enough to convince us that they will take this country to a higher level. I am not in support of restructuring. I am for a programme that will deliver the country from its current challenges and make it better.

The All Progressives Congress came up with the slogan, ‘Change.’ Every Nigerian supported them without asking what they planned to change. Now, tell me, what changes did we see in Nigeria? Is it change for the better or for the worse? We have moved from fighting the Boko Haram insurgency to tackling a host of security challenges in the country.

So, I don’t want people to take Nigeria for a ride, in terms of slogans. Restructuring is a mere slogan. Let it be defined. Let us know the black and white of restructuring. What will it look like? What and what are we going to restructure? I will not support anything that I don’t know. Let me know what it entails, then I will make up my mind, whether to support or oppose it.

Chief Ayo Adebanjo said you all agreed on restructuring before the 2019 general elections. How true is this?

Adebanjo is my junior brother and a colleague. We have known each other for over 70 years now. I know him very well. So let him explain, especially to the media, how we reached an agreement on restructuring. Tell him I have forgotten what we discussed about restructuring. It’s not that I deliberately forgot about it, I just can’t remember. Let him remind me, as a friend, what it was all about. I don’t want anybody to mislead you, the younger generation, by saying that we agreed on restructuring at one time. I am older than Adebanjo. May be this is why I tend to forget things easily now. Being a younger person, he should remind me of how we came about adopting restructuring during our conference.

Some groups in the South-West are agitating for secession from Nigeria. What is your take on this?

Everybody, whether in the South-West, South-East, South-South, North-West, North-East or North- Central, needs Nigeria. I know the South-West is one of the richest parts of the country. If, indeed, it is the richest part of Nigeria today, it owes its wealth to all Nigerians. Some of the people want to carry the riches and run away. We will stay here together and rebuild this country. Let’s come together and build a country where we can live together peacefully.

Are you saying the idea of secession should be abandoned?

You and I know what happened when some people tried to secede from this country. The majority of Nigerians want to stay together and they will join forces to fight whoever that wants to secede from Nigeria. You know history, nobody can destroy Nigeria peacefully. When anybody is thinking of secession, he is thinking of war. Such a person should know that the whole country will come together to fight him in the same way, the whole country came together to fight Ojukwu when he wanted to secede. I can assure them that that is what is going to happen. If they don’t believe me, let them try it.

Do you believe in zoning of the presidency? Which zone do you think deserves to produce the president in 2023?

To tell you the truth, I was a member of the defunct National Party of Nigeria, NPN, in the Second Republic. It was the NPN that introduced zoning and rotation into Nigeria’s political vocabulary. Let me tell you, I am proud of my participation in the NPN. It was the first political party that brought everybody together.

The NPN didn’t belong to the Yoruba, the Igbo or the Hausa. It belonged to everybody. We were all equal partners in the NPN. But you asked me about 2023 presidency, whether it should be zoned to a particular place. Let me tell you the truth, I am tired of the American presidential system of government. I am proposing the French system.

So, I prefer Nigeria adopting the French system of government. I know we are thinking of changing the constitution. I hope they will do that, so that this country, whether we love it or not, move forward. The mindset of whether it is North or South will be taken care of.

With the French system of government, if the president is coming from the North, the Prime Minister will come from the South or vice versa. There will be peace and harmony in the country, as well as synergy and more team work. This is what this country needs to move forward.

C’River PDP To APC: Tell Ayade To Return Our Secretariat, Vital Documents, Or…