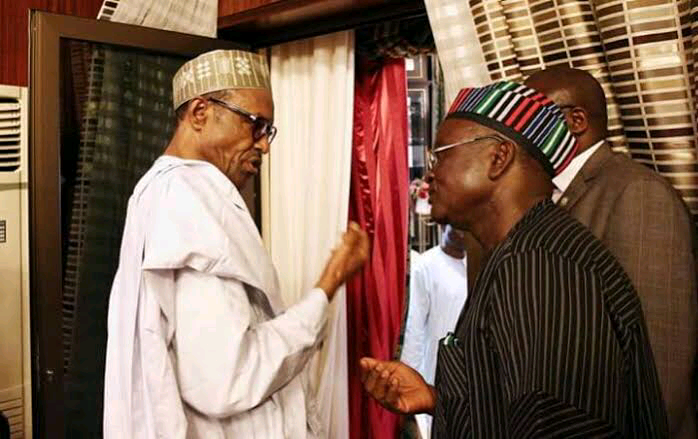 Hooray! The leaves are falling! It’s autumn, the evening of the four seasons. Harvested crops and fruits, in baskets, are heading to barns from farms.

Winter, spring, summer and autumn. Each period of the season walks on three legs. December, January and February are the three legs of Winter, Spring springs on March, April and May; Summer walks in the sun of June, July and August while Autumn descends the stairs of the season into September, October and November.

Autumn is the birthing of the farmer’s long-planted seeds of hope, which undergo fertilisation and growth in spring, and maturation in summer. It’s the period when farmers reap the fruits of their labour. When sweat is sweet.

Autumn, aka Fall, is the period before winter, which is the coldest of the seasons. And winter connotes nightfall or death, when to sleep is to wake and to die is to live.

But autumn is not the period when Samuel Ortom, governor of Nigeria’s food basket, Benue State, should dare Nigeria’s President, Major General Muhammadu Buhari (retd.), a 78-year-old herdsman, who he described as the worst leader ever, when it comes to security, corruption, economy, human rights, press freedom and keeping promises.

Not a herdsman, Ortom, a governor and a rancher, made some of his bulky allegations in August. And as the allegations rage into autumn, Ortom has yet to renounce his heresy against Buhari, the great Fulani President.

Call it a jinx, I don’t care; August is never Buhari’s lucky month, it’s December, the month of his birth, when like Macbeth, ambition overtook him and he stabbed to death the democratically elected government of the late President Shehu Shagari, a fellow Fulani, in the final hours of December 31, 1983. Macbeth wasn’t lucky with August, either – he was killed on August 15, 1057.

Call it the height of cold-bloodedness, if you care; the bloodiest of Nigeria’s generals, Ibrahim Babangida, likewise, chose his birth month, August, to drive the dagger into the back of Buhari, his former boss, in a palace coup on August 27, 1985. Is there an art to find the mind’s construction on the face? I doubt it. But I know karma is consistent.

According to the Ortom of Benue, nothing good can ever come out of the Buhari regime in all the periods of the season – winter, spring, summer and autumn.

There seems to be nothing august in August for Buhari. Reacting to the abduction of a major and the killing of two soldiers at the Nigerian Defence Academy, Kaduna, in August, retired Navy Commodore Kunle Olawunmi, who described himself as a Professor of Global Security Studies, in an interview monitored on Channels Television, said known sponsors of Boko Haram live in Aso Rock.

He said, “Recently, 400 people were gathered as sponsors of Boko Haram. Why is it that the Buhari government has refused to try them? Why can’t this government bring them to trial if not that they are partisan and part of the charade that is going on?

“You remember this Boko Haram issue started in 2012 and I was in the Military Intelligence at that time. We arrested those people. My organisation actually conducted interrogation and they (suspects) mentioned names.

To whom much is given, much is expected. If a commoner like me know that August isn’t Buhari’s favourite month, why didn’t Ortom, a seasoned politician, and Olawunmi, the courageous Navy Commodore know? This is why I will depart, at this juncture, from Ortom and Olawunmi, and return my unalloyed allegiance to President Buhari, who is bigger than Nigeria’s Constitution.

If you think the President isn’t bigger than the country plus her Constitution, why was the Central Bank Act prohibiting the abuse of the naira suspended whenever Buhari’s children are wedding?

Even Buhari is bigger than religious laws. Or, why was the merciless-on-the-poor, acquiescing-to-rich Kano Islamic police, Hisbah, not at the wedding of the President’s son, Yusuf, to Zahra, the daughter of the Emir of Bichi, Nasir Ado Bayero, to arrest guests who wore outlawed haircuts such as Afro and mohawk?

Some of the great Hisbah police prescriptions for godly living include banning of lewd music, banning commercial motorcyclists from carrying two females at a time; banning of alcohol consumption, and banning boutiques from displaying clothes on full mannequins – you must remove the heads of the mannequins because they promote idolatry.

Many poor people have received varying degrees of punishments, including public shaving of hair and public flogging for contravening these paradise-seeking laws.

But the ears of Hisbah police were deaf to the lewd Naira Marley song, “I’m Coming,” sung at Yusuf’s wedding and its eyes were blind to the cleavage-revealing clothes worn by some female guests.

Did you see the video of the prodigal bus ride of Yusuf’s silver-spoon friends that attended the wedding, and the security around the bus?

Did you see the hysterical sons of Nigeria’s leaders donating naira and dollars worth over N500,000 to their bus driver, who was merely doing his work, even as they made a lousy show of it?

A particular scene in the viral video shocked me. Yes, e shock me. It was the handsome young man referred to as Osinbajo by his boisterous friends. He donated $100 on behalf of ‘me and my brothers in the South-West’. I ask, are the millions of unemployed graduates and touts in the South-West part of the young Osinbajo’s brothers? There’s God o.

Did you notice the dexterity with which Osinbajo peeled a $100 bill from inside his bag with his two hands, a move suggesting that a lot of more dollars were still in the rich black bag.

I watched another viral video. This time, from Afghanistan. It taught a great lesson in integrity. It was the video of Afghanistan former Minister of Communications, Sayed Sadaat, who now delivers food on a bicycle in Germany.

Talking about his new job, the 49-year-old British-Afghan dual citizen said both his job as minister in Afghanistan and delivery man in Germany involved serving people.

Sadaat, who holds degrees in IT and Telecommunications, and hopes to take up a job in the telecoms industry as soon as he learns basic German, said he was not ashamed of his current job.

Sadaat served for two years as minister, and voluntarily quit his post in 2020 because he didn’t want to soil his hands.

Explaining that he was proud of his new job, Sadaat said he could have made millions of dollars as minister.

“I could have bought buildings in Germany and hotels in Dubai, I wouldn’t have needed to work. But I’m proud that my soul is happy and I have nothing to be guilty (about). So, I’m doing an ordinary job. I hope other politicians also follow the same way to work with the public,” he told journalists

May God bless Nigeria with leaders like Sadaat, amen.

•Odesola, a journalist and public analysts, writes from the United States of America, and can be reached via: Email: tundeodes2003@yahoo.com; Facebook: @tunde odesola; and Twitter: @tunde_odesola

Your Admissions Are Illegal, JAMB Tells UNIABUJA, Others