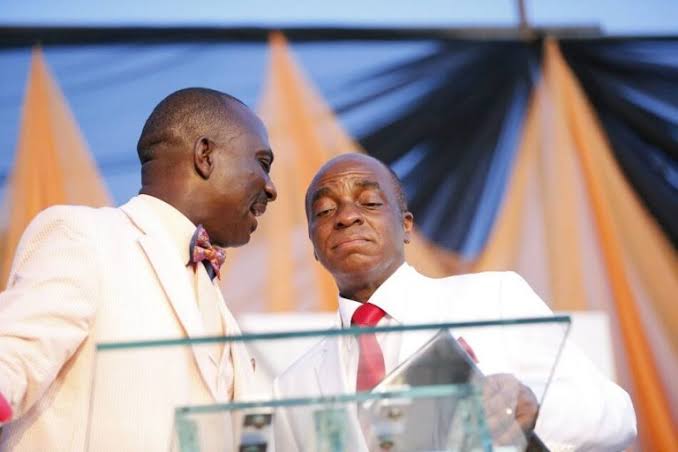 From top to bottom, the curtain over the Covenant of Impunity tore into two during a viral service penultimate Sunday, revealing the rot in its holy of holies.

Eight days after he arrogantly defied the teaching of Jesus Christ on giving unto Caesar what is Caesar’s – by openly holding multiple services for over 200,000 worshippers amid the raging global coronavirus pandemic, the founder, Living Faith Church Worldwide International aka Winners’ Chapel, Ogun State, Bishop David Oyedepo, must be feeling like a godhead.

Living Faith Church WORLDWIDE INTERNATIONAL! What a big name for a big church! Uhnmm! Akiika! But can an organisation be worldwide and not be international? Or is this a deliberate spiritual grammatical blunder? A 50,400-capacity church must possess a jaw-jamming name, I guess.

In a deliberate conspiracy against the health of millions of Nigerians, a similar but sadder dIsobedience to constituted authority played out in Abuja, the nation’s capital when a medical doctor-turned cleric, Paul Enenche, misled worshippers in his 100,000-seater church and held multiple services penultimate Sunday. If Oyedepo, an architect, was blind to the gravity of his disgusting and punishable act, Enenche, a medical doctor, should have his medical certificate revoked and also tried in court and punished. This is what the Medical and Dental Council of Nigeria should do forthwith because by his medical training, Enenche shouldn’t have misguided thousands of Nigerians to worship in his Dunamis International Gospel Centre. By opening their churches for services, Oyedepo and Eneche committed a grievous offence against God and humanity. I remember the biblical David didn’t jump into the warfront to confront Goliath, despite knowing he could kill the giant. David still had to go through the authorities to kill the Philistine.

The effects of Oyedepo and Enenche’s actions would be seen in the coming weeks when the rate of infections will continue to climb in the country. In the long run, Nigeria will be the worst-hit country in the world if a cure or prevention isn’t found for the disease soon.

Predictably, when diligent nations of the world heave sighs of relief from coronavirus in the months ahead, Nigeria is most likely to be reeling under the asphyxiating weight of the plague because of the actions of people like Oyedepo, Enenche and the inaction of the Muhammadu Buhari-led administration, which left Nigerian borders open for too long. The endless list of global and national personalities stricken by the disease is enough evidence to show its deathliness.

Oyedepo and Enenche should be openly tried and jailed if found guilty of deliberate and selfish acts of sabotaging the health of Nigerians and, by extension, the country’s economy. The defiance of Oyedepo and Enenche is capable of causing religious unrest because some Muslims will protest if an imam who decides to also hold jumat service is stopped by government. Last Friday’s volatile jumat service in Jos by one Yahaya Jingir appears to be an open challenge against state and federal governments’ irresponsible indulgence of Oyedepo and Enenche’s sinful worship. Jingir, along with Oyedepo and Eneche, should be taken to separate coronavirus treatment centres and made to live with, and pray for patients in the bid to cure them. If these clerics don’t contract the disease, I’ll stand before a moving train.

I listened to the whole of Oyedepo’s offensive sermon, it was a futile justification of a misdeed. Oyedepo should’ve gone to neighbouring Ghana, open his Accra church for service, and let’s see if batons won’t whack bumps on his hairless pate. If he opened his church at this time in the western world, the bishop would be sewn fitting jail clothes and slammed behind bars!

It’s ironic that despite claims to healing the sick and raising the dead, no known physically challenged Nigerian has been healed by any of the billionaire Nigerian clerics. Popular gospel musician, Yinka Ayefele, has done many songs stating his innermost desire to discard his wheelchair and walk. It’s curious that no Nigerian pastor has been able to tell God to make Ayefele walk or heal any well known Nigerian with physical disability. Instead, an avalanche of fake miracles has been making the rounds in our churches.

Going by their proclivity for loudness and the dollar, if any of these powerless Nigerian pastors have an atom of the powers they claim to possess, they would’ve made a show of healing sick members of the President’s family or any other member of the thieving political class.

Since over 40 years ago, Nigeria’s downtrodden have been left with just two options and a mirage. One of the options is the devil. The other is the deep blue sea. Expatiating, the devil option is the never-do-well political class. And the deep blue sea option is the clergy on the altar, altering destinies and feeding fat on people’s fears and ignorance. The third option – the mirage – is the forlorn hope incubated by a few Nigerians guarding the crumbling fort of integrity.

Between dare-devil politicians and kingdom-of-money-seeking clerics, I’ll choose the former. Dare-devil Nigerian politicians are callous, uncouth and stupid. But the clerics inside arks flailing on the deep blue sea are worse. They kill softly and their innumerable victims remain grateful to them even on their deathbeds. They’re the real ‘osoronga’ (earthly principalities) who suck victims’ blood without leaving traces and devour the limbs without cracking bones, turning the Holy Bible into a bloody tool of exploitation.

I remember Nigeria’s grandmaster of comedy, the late Moses Olaiya aka Baba Sala, as I contemplate Nigeria’s dare-devil politicians. Short, stubborn and thoroughly foolish, Yaya, a malcontent young fella laughs in Baba Sala’s court. Enraged, Baba Sala sought to know who laughs in his court. The accused stands up and introduces himself, “My name is Yaya. I live in Moniya. My mother sells ‘eran oya’ (bushmeat).” In the thinking of Baba Sala, the judge, the inferred preponderance of ‘iya’ (meaning suffering) in Yaya’s introduction should condemn the accused person to eternal beating.

But Yaya has since grown into a man of means, governing the Kingdom of Quogi near Quara. Panting, Yaya jumped on the treadmill last week, eyes bloodshot, nostrils gushing fire, mouth baring fangs, chest pounding. He wasn’t different from his enemy and political boss, the DINOsaur. When the midget should be busy seeking practical ways to check coronavirus from gaining a foothold in his domain, he was engrossed with challenging imaginary enemies to a bout, cursing and threatening. Whereas the tall dinosaur has the brain of a total retard, the short Yaya is rude, crude and unthinking. How can a kingdom be yoked with such two characters?

In the enclave of the daredevils, anything can happen. While world leaders frantically searched for solutions to the pandemic, Nigeria’s Senate was excitedly distributing brand new cars among its members when there were scant drugs and test kits at coronavirus care centres across the country. If materialism developed legs and walked into a lions’ den, Nigerian senators will suicidally follow. The distractive overconcentration on materialism over service is surely the reason why the Senate sought to ban generators nationwide instead of evolving laws to make the Power Holding Company of Nigeria stop tormenting Nigerians with darkness.

Not ready to be outdone in the macabre dance in the devildom, the country’s Presidency barred inquisitive media organisations from Aso Rock as though the seat of Nigeria’s sovereignty was an extension of Buhari’s ancestral hut in Katsina. As if that wasn’t enough affront against the Nigerian people, presidential aide, Mr Femi Adesina, said it wasn’t the style of General Buhari to address the nation in times of trouble!

Who will rescue our presidency? Who will bridge the disconnection between the President’s thinking and speech faculties? Who will tell the President that his administration is the worst in our history?