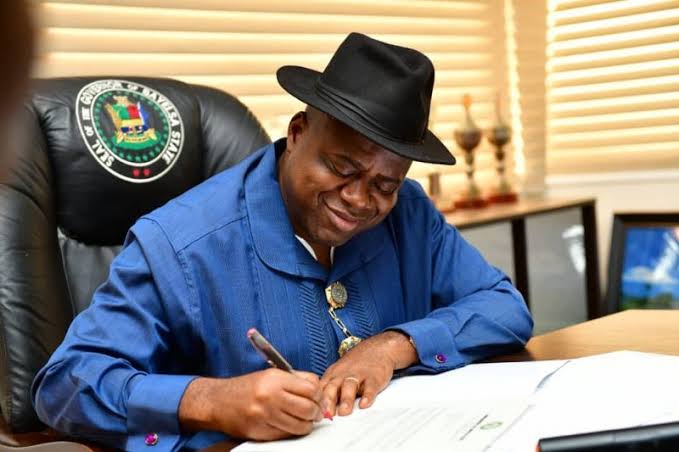 Bayelsa State governor, Senator Douye Diri, has strongly condemned an attempt to cause ethnic disharmony in the state through the Brass Fertiliser and Petrochemical Company project.

Diri’s condemnation came while reacting to a trending post on the social media, accusing the governor of plans to scuttle the project, because it was allegedly not sited in a “core Ijaw area.”

Declaring that those behind the allegation do not mean well for the state and the Ijaw nation, Governor Diri, in a statement by his Chief Press Secretary CPS, Mr Daniel Alabrah, said only enemies of the state could concoct such falsehood and spread fake news on social media in order to create ethnic disaffection.

Governor Diri maintained that his administration was committed to the unity and progress of the state and the Ijaw nation, rather than engaging in pettiness and promoting a divisive agenda.

The statement added, “As governor of the only homogenous Ijaw state, I owe our people the responsibility of promoting and preserving our unity. Having being in the frontlines of advocacy for a better Ijaw nation in the past, I cannot now negate those cherished principles and ideals. It is therefore out of sync to ascribe to my person such primordial and base sentiments.”

The governor called on critical stakeholders of the Ijaw nation, including the Minister of State for Petroleum, Chief Timipre Sylva, whose ministry supervises the project, to consider the overall interest of the state while working with others to ensure the project succeeds.

The billion-dollar investment, sited in Odioama community in Brass Local Government Area of Bayelsla State had been on the drawing board for a while and the Diri administration has held meetings with various stakeholders in order for it to commence.

The state Attorney-General and Commissioner for Justice, Mr. Biriyai Dambo, SAN, who has been part of the meetings, equally described the allegation against the governor as a blatant lie.

He said the governor from the inception of his administration has wholly supported the project.

Dambo said, “This is a blatant lie. We should try and get our facts straight and right.

“I have been part of the entire meetings with the governor and top officials of Brass Fertiliser and Petrochemical Limited. The Bayelsa State government under Governor Diri is in full support of the project and meetings are still ongoing to finetune the Joint Venture Agreement to be executed by the parties. Core Ijaw has had nothing to do with this.

“The progress, development and interest of the state is key to the administration. We must be very circumspect in whatever we utter or write.”

Speaking further, the Commissioner for Lands and Housing, Barr. Esau Andrew, who hails from the host community, Odioama, said in all meetings on the fertiliser project, the governor had shown absolute commitment; claiming, however, that the Nigerian National Petroleum Corporation, NNPC, was being influenced to sabotage the project.

Andrew said, “That was a deliberate, cheap and notorious blackmail, intended to poison the minds of Bayelsans, all in a bid to cover a malicious intention. The governor has repeatedly said he would ensure safe and unencumbered operations as well as protect the share of the state and the host community.

“The governor held meeting with the Chiefs Council of Odioama Kingdom and restated his stance of protecting the community’s equity share, and also informed them of his efforts in bringing about the prevailing peace in Odioama Kingdom.

“Rather, it was someone else who covertly wanted to relocate the Brass Fertiliser Project from Odioama to the Okpoama LNG site in 2017. But the people of Odioama Kingdom vehemently protested and resisted it.

“This was the same cheap blackmail against the former governor, Seriake Dickson. The people of Odioama are fully aware of it and are ready to protect and defend our ancestral land.”

He also explained that the Brass Fertiliser and Petrochemical Company acquired a total of 595 hectares of land from the host community and that the state government had long issued the Certificate of Occupancy, C of O, and other title documents to the company.

He added, “The C of O processing fee of N116,075,000 was suspended for two years by the Bayelsa State government, all in fulfillment of the state’s responsibilities as contained in the Joint Venture Agreement between the state and Brass Fertiliser, a company registered for this purpose by DSV Petroleum Limited. The company has agreed to build and operate a Urea, Methanol and Gas Processing Plant, all to be sited on the 595 hectares of land acquired from Odioama community.”