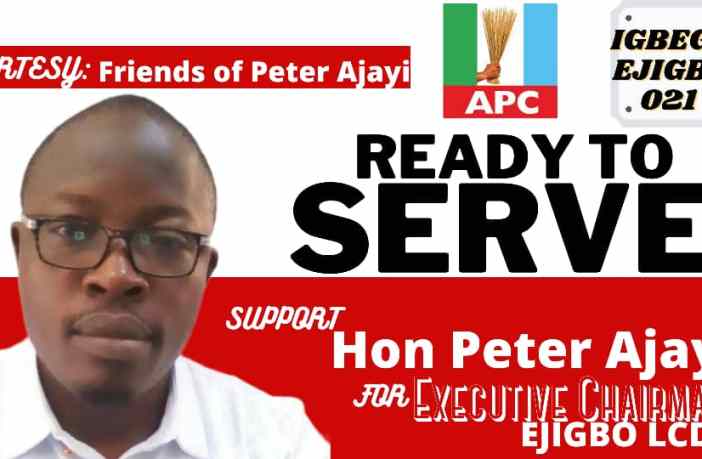 Peter Ajayi Campaign Team, PACT, the campaign organisation of a chairmanship aspirant in Ejigbo Local Council Development Area, LCDA, Hon. Peter Ajayi, has accused the immediate past Commissioner For Information and Strategy during the tenure of former Governor Akinwunmi Ambode, Mr Kehinde Bamigbetan, of masterminding the rumour that their principal, Hon Ajayi, has been disqualified by the All Progressives Congress, APC, Local Government Elections Screening Committee.

In a statement signed and made available by its Director of Media and Publicity, Damilola Onadeko, PACT said that the news carried by the online version of Echonews Paper has outrightly confirmed the perennial views of the people of Ejigbo, Isolo and Oshodi that Echo News floats nothing but yellow journalism.

The statement noted that Bamigbetan, through his newspaper, Echo News, planned to tarnish and denigrate the image of Hon Ajayi with the misinformation, adding that such act would not stop the love Ejigbo voters have for the aspirant.

”Hon. Ajayi not only in the race, but also not disqualified by the screening committee. Whereas our principal and chairmanship hopeful, Hon. Ajayi has pursued all his educational achievements, using his birth certificate and has presented same since he has been contesting from 2017 till date.

“This disparaging and derogatory news, reported by Echo newspaper un its online version is one amongst many of its propaganda, floated to bring down the choice of the masses in Ejigbo LCDA and the best man for the job, Hon. Ajayi.”

PACT further declared that it is not worried about this fake, jaundiced and unverified news aired by the supposed Publisher, Mr. Bamigbetan, adding, “We write to put the record straight and debunk this biased notion, innuendoes and blatant lies reported by Echo newspaper online version this afternoon.

“Our Principal, Hon. Ajayi produced the voter card without much ado, while the chairman of the APC State Screening Committee, a revered politician and refined democrat, Hon. Babatunde Oganla, SAN sighted and vetted both the birth certificate and voter card, purportedly reported to have not been paraded by our principal and chairmanship hopeful, Hon. Ajayi.

“Members of the public who may wish to verify the sentiments and yellow journalism of Echo newspaper (online version), may do that from the Lagos APC Screening Committee, which screened chairmanship aspirants from Ejigbo LCDA.”

PACT further averred that Echo newspaper, and its paid propagandists and rumours peddlers deliberately attempted to drag the good name of our principal in the mud via their cheap miscalculations, desperation for power and cheap popularity.

It added, “PACT condemns this attempted defamation of character and libelous carnage as reported by Echo newspaper in its entirety.

“PAC is unwearied, unperturbed and is ever focused to go into the primary elections, while abiding by extant guidelines of our great party, the APC and shall always be law abiding.

“The figment of the imagination of failed and clueless elements, hurled in bad faith to cause confusion in the polity failed woefully on arrival.

“Albeit, the avowed leadership of our party, the APC, has stated repeatedly and unequivocally that nobody should be discriminated against by virtue of age, gender, where he comes from, religious affiliation or cultural background.

“We reiterate yet again, that we hold our party leadership in high esteem and shall continue to do same.

“We however, once again, appeal to them to dissociate themselves from these elements who chose to release a result of an ongoing exercise.

“We believe strongly in the party’s position and its modus operandi already in place, rather than any artificial encumbrance or impediments, should determine who goes to the primaries or hoists the party’s flag.

“We therefore ask members of the public to disregard the news, as it is biased, unprofessional and technically evil.

“We urge the good people of Ejigbo LCDA to go about their legitimate businesses peacefully,and confirm to all and sundry that Hon Ajayi is still very much in the race and he and members of his campaign team shall continue to abide by extant guidelines of our great party, the APC, and relevant electoral laws.”