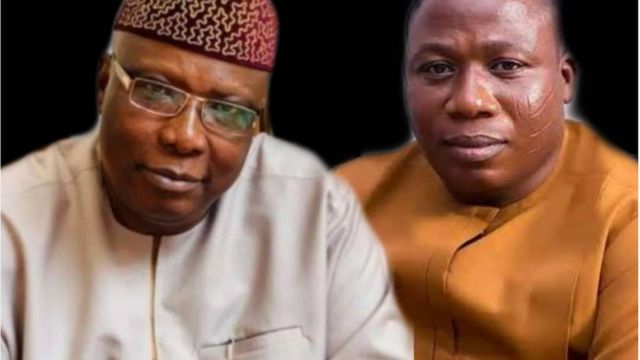 Senator Babafemi Ojudu in an article on Monday described Chief Sunday Adeyemo Igboho as a political thug. By now, we are all familiar with the manufactured narrative advertised in the piece by Ojudu to smear Igboho. I need not waste time going into details of Ojudu’s rant. Igboho has since denied the allegation.

In an attempt to destroy Igboho, Ojudu demolished himself. In the piece, Ojudu revealed so much: that (1) he has been involved in election rigging by molesting, harassing, intimidating, and killing of political opponents.

(3) He has encouraged thuggery, violence, vandalism to entrench electoral fraud.

(4) He’s a poster child for political terrorism in Nigeria. Ojudu unmasked himself. Now we know the real Ojudu.

As expected, the incredible leadership of Igboho in confronting and containing Fulani herdsmen, who kidnapped and killed Igangan people attracts envy and jealousy of Yoruba political puppet leaders. Leadership is solving problems. Leadership is getting results. Igboho has demonstrated beyond belief that he’s a leader. Igboho has done for Yorubas what Bourdillion Napoleon could not do!

For the political expediency of Bola Ahmed Tinubu, Ojudu, as a lapdog, treats Tinubu’s opponents and critics as deplorable remnants of historic bigotry. His character assassination of Igboho is therefore understandable. As we inch closer and closer to 2023, prepare for some hard-hitting deja vu from Tinubu’s docile and dirty lapdog, Ojudu.

Ojudu, in awe licks Tinubu’s hands. He barks on cue. When Tinubu asks him to jump, he asks him how high? He will do anything to appease and approve Tinubu. It’s a bitter pill for Ojudu to swallow the profile of courage displayed by Igboho. He sees Igboho as a threat to the political calculation of his master in 2023. His attack on Igboho portrays Ojudu as the lapdog in charge of public relations wing of TNN, Tinubu Non-Negotiable, 2023.

Rather than act as a staunch guardian of objective truth as a journalist he purports to be, Ojudu behaves as a lapdog seeking to satisfy his master, Tinubu. He strokes Tinubu’s ego to stay in his good graces. Ojudu can eat a cyanide capsule on the spot to please his master, Tinubu.

Where was Ojudu when Fulanis were killing his home town people of Ekiti? Where was Ojudu when Tinubu, Buhari, Sanwo-Olu gunned down peaceful protesters at Lekki toll gate? Ojudu’s political assignment is putting Tinubu’s political interest ahead of the safety and security of Yorubas. It is people like Ojudu, for their own primitive selfishness and greediness, who aid and abet Fulani herdsmen terrorists that turn Yoruba land into empty, wasted land. Ojudu and his political profiteers collude with Fulanis to ruin Yoruba farms and fertile lands fallow with elephant grass.

Igboho by words and action has demonstrated that “the ultimate measure of a man is not where he stands in moments of comfort and convenience, but where he stands at times of challenge and controversy.”

No amount of concocted lies, insinuations, and innuendos by Ojudu can deny or diminish Igboho’s love for Igangan people and his courage to fight Fulani invaders who are coming for Yorubas. History will be kind to him.