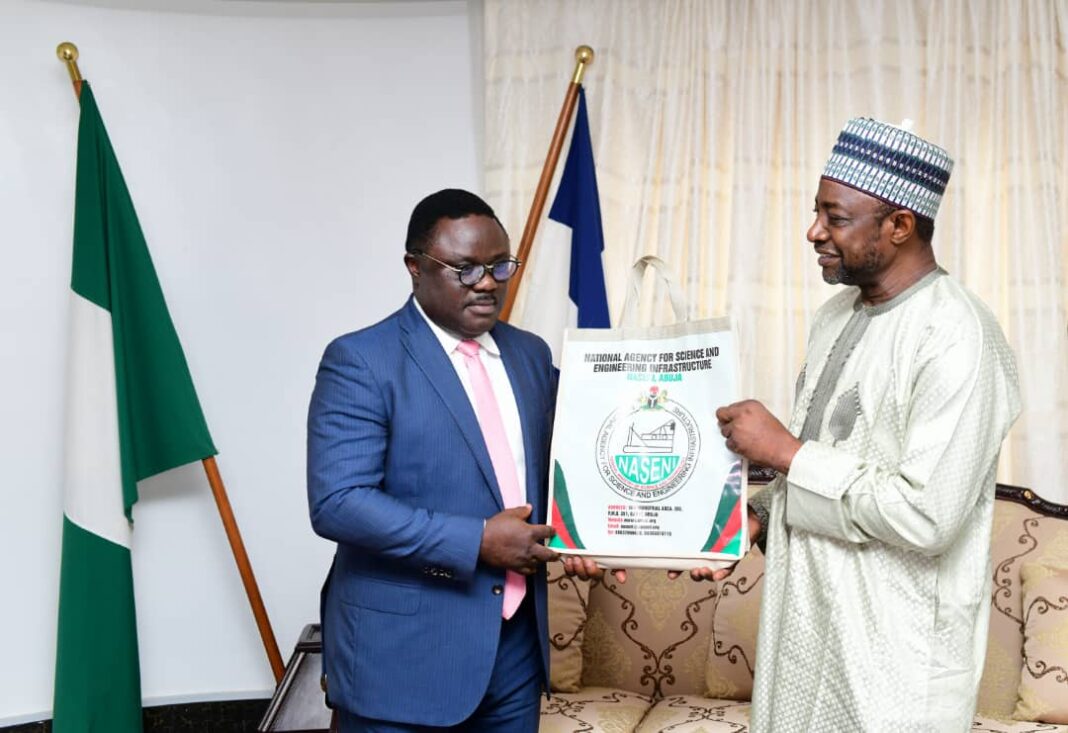 To demonstrate the commitment of Cross River State to partner the National Agency for Science and Engineering Infrastructure, NASENI, the state governor, Prof. Ben Ayade, has announced a whopping N100 million as research grant to the agency for the generation of electricity from borehole.

The research into how to generate electricity from borehole is to be jointly undertaken by the agency and the state-owned University of Cross River State, UNICROSS.

Speaking at the State Executive Council Chamber in Calabar, while playing host to a team of NASENI officials, led by its Executive Vice Chairman, Professor Muhammed Sani Haruna, Ayade said that the time has come for NASENI to develop a wholistic framework to launch Nigeria into the global engineering map.

He said, “NASENI is an agency responsible for the science and engineering infrastructure. We must begin to truly develop engineering infrastructure in this country. It is a shame that as a country, we still import spare parts, it is a shame that you have to take a man from a temperate climate, who does not have sun, who is always in the cold, to come and tell us how to use our sunlight.

“What a shame that you have crude oil under your earth, yet it takes somebody who comes from a country that does not have oil to tell you how to dig it out, more shameful that you do not even know how to use it. You have to send it out.”

Urging NASENI to set up an office in Calabar, Ayade pledged a vehicle and an office space.

The governor further challenged NASENI to bring to bear its true essence, because “Cross River State is ready to collaborate with you and I am making available, once you establish your agency here in Cross River State, one brand new pickup, and an immediate office for you to move to and make available a land for you to build a permanent office.”

He added, “We are providing, in collaboration with University of Cross River, the sum of N100 million for the development and generation of electricity from borehole. I want to also challenge you that from this same N100 million, you should generate electricity for CalasVegas from the Calabar River.

“This is going to be our (Cross River State) patent, because the research is being financed by us in collaboration with NASENI. So together, we will hold the baton to be able to ensure that every single home has electricity from simply just taking water from the ground, using that water to move a turbine and the turbine generates electricity and the electricity pumps back the water from the borehole and recirculate.”

Ayade commended Prof Haruna’s brilliance, after listening to his presentation and promised to be a strong advocate for the proper funding of the agency by the Federal Government.

He said, “I am with NASENI on the realization of one percent allocation of the federal revenue to the agency in order for it to perform optimally.

“Everywhere I go in Nigeria, especially amongst my colleague governors, I will act as ambassador for NASENI henceforth.”

Speaking earlier, Prof Haruna extolled Ayade’s sterling administrative and academic qualities, saying that he was surprised, when as a PhD student at the Jomo Kenyatta University of Agriculture and Technology, Kenya, the students were advised to make reference to his 1994 PhD citation.

While pledging that NASENI will collaborate with the Cross River government in its industrialisation drive, Prof Haruna pleaded with the governor to market the agency to his colleagues.

He said, “Your Excellency, be our ambassador, convince your colleagues that what we are doing in NASENI is very important to them.

“We commend you for the massive agricultural and infrastructural investment in Cross River State. You are turning things around, we offer to collaborate with you, because it is within our mandate to collaborate with states. Most importantly, we are willing to work with the private sector in the state to establish manufacturing concerns that are technology oriented and will generate local employment.”