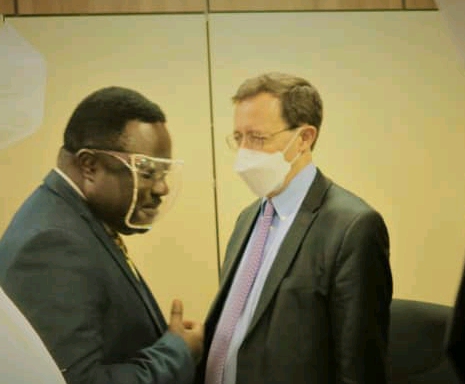 The Cross River State governor, Sir Ben Ayade, on Tuesday met with the French Minister of Foreign Affairs and Economic Attractiveness, Franck Riester, on the sidelines of the Nigeria Governors’ Forum, NGF, meeting in Abuja.

The meeting afforded the governor the opportunity to discuss with the French minister, developmental issues in the state and areas requiring collaboration.

Soliciting for the cooperation of the French government to further consolidate on the gains of his administration, Ayade urged the French envoy to consider Cross River State a priority state in the country’s intervention programmes and diplomatic relations with Nigeria.

He reiterated his state’s willingness to partner with French companies to deliver more infrastructure for the benefit of the people, while exploring areas of mutual cooperation and trade interests.

The governor further listed areas of intervention in the state to include agriculture, healthcare, education, housing, power, super highway as well as deep seaport.

Responding, the French envoy, Riester assured that Cross River State would be given priority by France in her interventions and diplomatic relations with Nigeria.

Riester, who was briefed by the French Ambassador to Nigeria, Jerome Pasquier, who recently took a tour of Ayade’s projects across the state, while on a two-day working visit, said he was impressed with Ayade’s drive to industrialize Cross River.