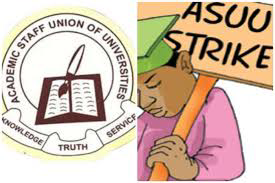 The Kwara State University branch if the Academic Staff Union of Universities, ASUU, has said that it is constrained to join the ongoing ASUU nationwide strike due to current challenges facing the university.

Insisting that KWASU ASUU is totally in support of the strike, the chairman of KWASU ASUU, Dr Shehu Salahu, in a statement in Ilorin pleaded with the national body to understand the predicaments of the institution’s lecturers.

KWASU ASUU, however, called on the Federal Government to do the needful and bring to an end, the lecturers’ strike in the overall interests of the country.

The statement said, “We regret our inability to join the second stage of the current warning strike in view of the peculiar challenges for which we seek the understanding of the national body of our union.

“However, we support the actions and initiatives of the national body on matters before the Federal Government, and call on the Nigerian government to do the needful to end the current impasse in the interest of the nation.

“The KWASU branch if ASUU, presently on observer status, is following the trend and the efforts of the national ASUU to resolve the matter before the Federal Government and is continuously briefing members of the developments, as communicated by the national ASUU, as well as attending branch and zonal meetings called to appraise the situation.

“As a young branch just admitted into the fold, KWASU has challenges owing to our funding status of zero subvention for about seven years ago. The branch relies on internally generated revenue, IGR, as well as loans from banks to run the university.

“This situation is detrimental in no small measure to the system. KWASU is relatively a new branch and our members are gradually being initiated into the ASUU philosophy, tradition and procedures.

“The national ASUU has been fully briefed about our peculiar situation and had directed the Ibadan zone of ASUU to intervene and advise on how we can overcome the situation in our university.

“Our branch has acted on the advise of the zone and had communicated the Vice Chancellor, the Governing Council, the honourable Commissioner for Tertiary Education and the Visitor, Governor AbdulRahman AbdulRazaq.

“We are awaiting the outcome of the communication with the relevant authorities and will brief the zonal and national body of
ASUU accordingly, of developments.

“ASUU is on ground in KWASU and as directed by the national executive, we have convened an emergency congress to brief members on developments in the last executive meeting held on Sunday, 13th March, 2022, to review the warning strike. “