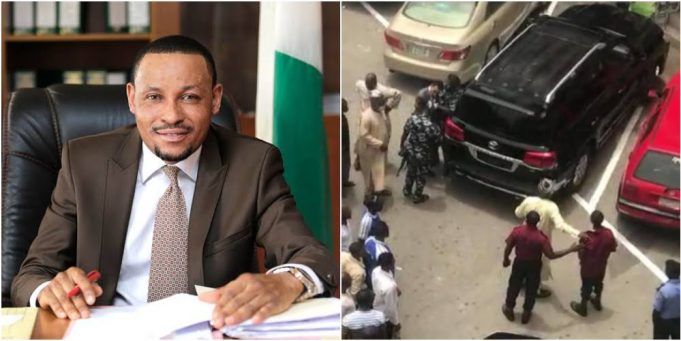 The Senate is set to prove the Chairman of the Code of Conduct Tribunal, CCT, Danladi Umar, per allegation of assaulting a security guard at a plaza in Abuja, the Federal Capital Territory, FCT.

The d ecisionto rpobe Umar followed a petition, written by the security guard, Mr. Clement Kargwak, and brought to the floor of the upper legislative chamber of the National Assembly on Tuesday, April 21, by Senator Istifanus Gyang, PDP, Plateau North.

Senate President, Ahmed Lawnan referred the petition to the Senate Committee on Ethics, Privileges and Public Petitions for immediate investigation.

Kargwak petition, signed by his lawyer, Timzing Venyir Ramnap, urged the Senate to investigate the matter in keeping with its duty of oversight on the executive and judicial arms of government.

The petitioner also requested the upper chamber to prevail on President Muhammadu Buhari to take disciplinary action against the CCT Chairman or call on the Inspector General of Police and the Attorney General of the Federation and Minister of Justice to investigate, arrest and prosecute Umar for his actions.

“On sighting Justice Umar Danladi’s car trying to park wrongly, he instructed him to properly park in a space provided by the management of Banex plaza, only for Justice Umar Danladi to come down from the SUV jeep, with his security men and started assaulting and brutalizing him by slapping him on his face, asking him to kneel down and thereby used his leg to hit him on his chest, and thereby inflicting bodily harm on him.

“The management of the plaza rushed him to the hospital for medical attention, where he has been receiving medication.

“That Justice Umar Danladi personally did 99 percent of the assault and brutality on him, as can be seen in a viral video, which circulated on social media and is hereby enclosed for your consideration.

“In view of the above scenario on the actions of the Chairman of the Code of Conduct Tribunal, Justice Umar Danladi, we hereby urge the Nigeria Senate to immediately launch an investigation to ascertain the role of the Honourable Justice Umar Danladi in this, while happening, and ensure Justice for Mr. Clement Kargwak. This is because the constitution of the Federal Republic of Nigeria gives the National Assembly the powers of oversight to checkmate the activities of the executive and judicial arms of government, when either of the two is found culpable.

“We also wish to state that in making your decision on this issue, we wish to remind the Senate that it also has the power to direct the President of the Federal Republic of Nigeria to take disciplinary action against the Honourable Justice or order the Inspector General of Police and the Attorney General of the Federation to investigate, arrest and prosecute Hounourable Justice Umar Danladi for his actions.”