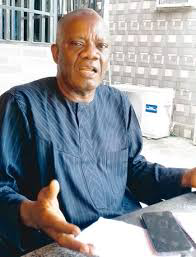 The gubernatorial candidate of the Accord Party in the forthcoming June 18 Ekiti State governorship election, Basorun Reuben Famuyibo, BRF, has called in security agencies to arrest every presidential aspirant who has purchased the Expression of Interest and Nomination Form of the All Progressives Congress, APC, for N100 million.

Basorun Famuyibo called on the Economic and Financial Crimes Commission, EFCC, and other security agencies to without further delay arrest everyone who has committed N100 million to the purchase of the forms.

In a statement signed by his Special Adviser on Media nad Publicity, Olajide Omojolomoju, Basorun Famuyibo said, “If the N100 million could be raised in 100 places, all our students who confined to their homes following the ongoing industrial action by the Academic Staff Union of Universities, ASUU, would have returned to school and ASUU would have returned to classroom to do what they know best, which is impacting knowledge to our children.

“EFCC and other security agencies should without further delay arrest all presidential aspirants who have paid N100 million for the APC Expression of Interest and Nomination Forms.”

Basorun Famuyibo expressed shock and dismay at how the Federal Government had allowed the ASUU strike to excalate to the level it is now, lamenting that allowing the students to remain home for another three months is not in the best interest of stakeholders in the education sector of the country.