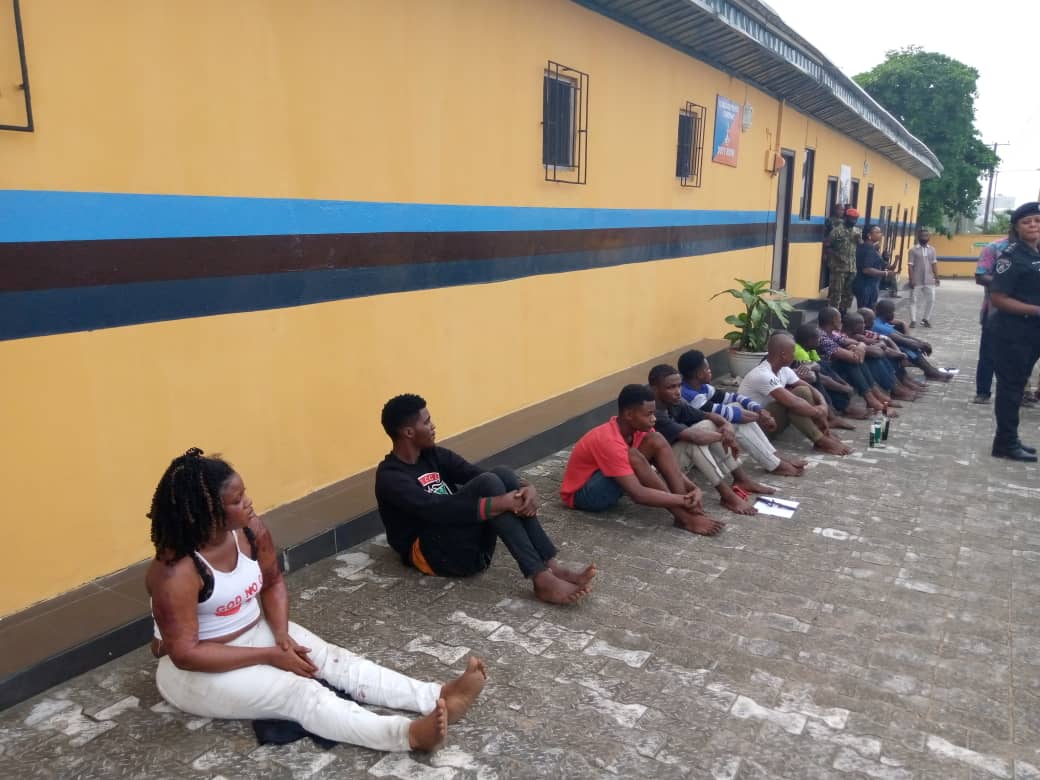 …Hands Them Over To Police

Among the suspects were 12 males and one female, 26-year-old Magdalene Effiong, arrested alongside other criminal suspects, after her boyfriend, now at large fled, leaving her behind and was picked by men of ‘Operation Akpakwu’ (a Joint Taskforce formed by Governro Ben Ayade to handle security situation in the state).

Handing over the criminal suspects, the Commanding Officer, 13 Brigade, Brig. Gen. Muhammed Aminu Abdullahi, stated that the suspects were arrested at various occasions within the past few weeks.

Giving details of their crime, he said, “Charles Sunday’s house was searched on 15th November 2020 at about 1055 hours and a locally made pistol was found on him.

“Similarly, Azeez Lasisi, Kelvin Bassey Effiom, Gabriel Okonwere arrested in a hotel in Calabar. Their arrest followed a tip off by the hotels proprietor and on getting to the scene, blood stains were observed, the robbers were with cutlasses and confessed to be members of Baga cultist group.

“Freedom Umoh and Etim Itam were arrested on the 7th of December following a tip off by youths of the community and they confessed to being members of Baga cult and armed robbers.

“Effiong Inyang and saviour David were arrested on their way from their shrine to their residence and during stop and search, assorted charms were found in their possession.

“Benjamin Stephen, Isaac Michael and Augustine Imeh were arrested at Oban during a stop and search duty and were found with one locally made pistol; while Jeremiah Archibong is a member of a five-man gang that robbed a house at Afokang street.”

Handing over the suspects and exhibits to the Nigeria Police for further investigation, Peluola called on the police to furnish the Brigade Headquarters with the outcome of their actions to enable them update their crime record.

Responding, the Police Public Relations Officer, PPRO, Irene Igbo, called for useful information that can assist security operatives more, stressing that ‘Operation Akpakwu’ formed by the Ayade-led administration is yielding result; insisting that if members of the public should give useful information to security agents, a lot can be achieved.