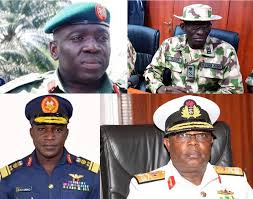 With the appointments of new Service Chiefs, the Nigerian Armed Forces may lose at least 20 generals, who may be forced to retire.

Among senior officers,whose retirement is expected is Lt.-Gen. Lamidi Adeosun, the Chief of Training and Operations, Army Headquarters, who wears the same rank with Buratai, the immediate past Army Chief. Adeosun was promoted in 2019 to the rank by Buhari.

Recall also that the Special Adviser to the President on Media and Publicity, Femi Adesina, had in a statement said Buhari had named officers who would head the nation’s armed forces to replace the erstwhile service chiefs.

While congratulating the new Service Chiefs, Buhari urged them to be loyal and dedicated in the discharge of their responsibilities.

Army Chief, Attahiru is a member of Course 35, while Irabor, Chief of Defence Staff, is a member of Course 34.
Defence Headquarters sources said that two options are available to the authorities; first some of the senior officers’ service years might be extended by the new Chief of Army Staff, to reap from their wealth of experience in the ongoing counter-insurgency campaign in the North East; and secondly, some of them might be posted to the Defence Headquarters, where they would not be reporting to the Army Chief.