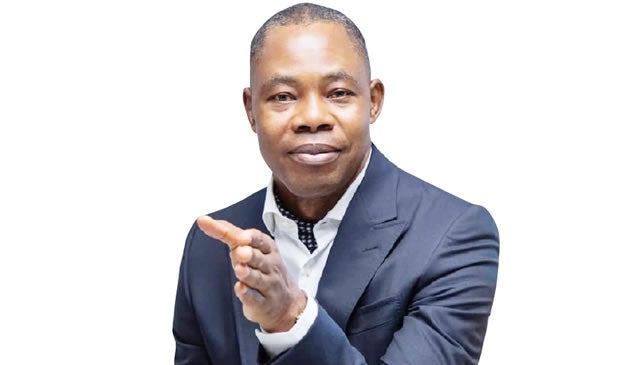 The member of the House of Representatives representing Akoko South East/West federal constituency, Hon Ade Adeogun, has appointed a member of the All Progressives Congress, APC, National Campaign Council for the October 10 gubernatorial election in Ondo State.

The appointment was contained in a letter signed by the APC National Secretary, Caretaker/Extra-Ordinary Convention Committee, Senator John Akpan Udoedehe. 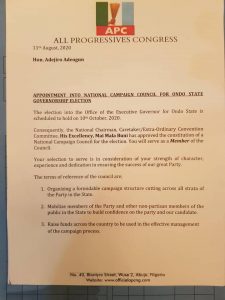 The letter, dated August 211 reads in part, “The National Chairman, Caretaker/Extra-Ordinary convention Committee, his Excellency, Mai Mala Buni, has approved the constitution of a National Campaign Council for the Ondo State gubernatorial election. You will serve as a Member of the Council.

“Your selection to serve is in consideration of your strength of character, experience and dedication in ensuring the success of our great party.” 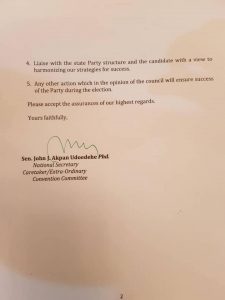 The terms of reference of the council, according to the letter include: organization of a formidable campaign structure cutting across all strata of the party in the state; mobilization of party and other non-partisan members of the public in the state to build confidence in the party and its candidate; raising funds across the country to be used in the effective management of the campaign process; liaising with state party structure and the candidate with a view to harmonizing the party’s strategies for success; and any other action which in the council’s opinion will ensure the party’s success during the election.

Reacting to this appointment, one the Special Assistants, SAs to Hon Ade Adeogun, Samad Orijeminiyi, expressed appreciation to the leadership of the APC “for finding us worthy. We will never betray this hope of undiluted service to humanity at all times. From the mountains of Akoko to the shores of Kiribo, our party will triumph by the grace of God and our people will be glad for it.”

He also extended same appreciation, on behalf of Hon Adeogun, to the people of Akoko South East/West federal constituency, who he said prepared the ground for what the national leadership of the party is building upon today, by first entrusting their mandate on Hon Adeogun.

Orijeminiyi added, “Hon Ade Adeogun has been appointed as one of the great party people who would work assiduously to ensure that our party, the All Progressive Congress, wins big in the forthcoming gubernatorial election in Ondo State.

“It’s important to note that he cannot do it alone. We count on the support of our constituents in getting this task sorted out.

As always, we have been raised to raise others and it will be in the interest of all if we are positioned in a place where we can FREELY ask for more for you. We strongly believe in this political family where we are rooted to seek your collective good. We must keep hope alive as you support us to always win for you.”