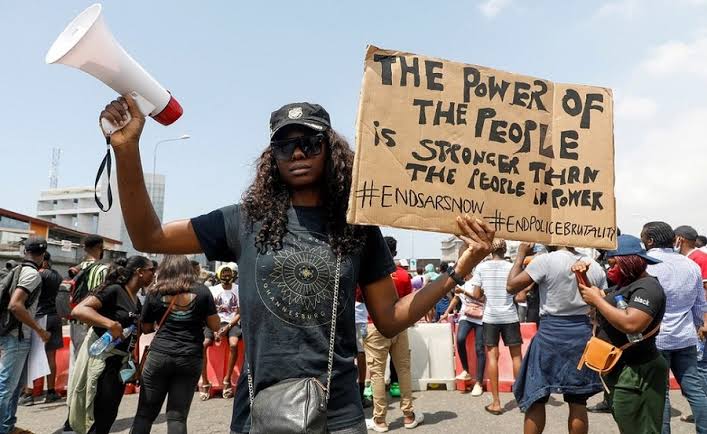 My generation should clam up and find a quiet spot to sit.

Isn’t that what we’ve done for 30 years and counting, now?

We’ve watched like a leprous goat as the generation before us messed up this country.

Some of us joined them because they wanted the crumbs from the masters’ table.

We claimed there was nothing we could do.

At a point we started excusing ourselves.

“I have children to send to school and I’m still young, so I can’t risk my life”, the lily-livered amongst us chorused.

Some of us even became the mouthpiece and the enablers of those who brought us to this impasse; making enemies of state of the minute proportion of us who dared to speak truth to power.

Like a crass illiterate, we even had the gut to call these young ones “leaders of tomorrow”, ignorantly and foolishly forgetting that those were the exact same phrase the people who hold this country by the jugular have used to describe even us for thirty years now.

Like an ostrich with its head buried in the sand as trouble approaches, convinced that what it doesn’t see won’t harm it, we have acted like if we buried our heads in the sand long enough, and played the nice boy good enough, the approaching revolution would somehow dissipate.

How perfect it is that it is the Generation X – the generation of our children – that would take the raging bull by the horn and slam the dang beast to the ground!

The bullets we feared, they took in the gut.

The punch we dodged, they took on the chin.

The race we failed to start, they are right on it.

It is this #EndSARS today,

But I’m convinced that these young ones,

The absolute gut they’ve displayed the past few days,

– I have no doubt that they are ready to confront most, if not all, of the issues that hold this country down.

No, I’m not on the streets with them – because the shame of letting them down won’t let me be.

But I watch from the selfish comfort of my sitting room,

Goose bumps on my skin,

Pride in my heart,

And prayers for their safety on my lips,

As these ones march from street to street,

And state to state.

It takes a raging bull,

To confront a raging bull headlong.

They care not about their safety,

Nor about the big mansions and bigger cars we the older generation care about.

They speak truth to power, in flowing and impeccable prose

Who knew this Generation X could do this?

And they’ve made it quite clear they don’t need us.

In our airconditioned homes and cars and offices,

All they care about is that we get the hell outta their way.

These ones don’t need us.

They don’t need our leadership –

Because in truth, we have none to give!

For if we did, this country wouldn’t be in the mess it is today.

Our children watched the Tiananmen Square massacre in China,

And we thought they were too preoccupied with inane things to care about their own country.

Oh, how wrong we were!

We’ve lampooned and condemned them to nothingness, called them the Big Brother Naija generation.

They combined in frenzied mood to make their BB House favourite cart away the prize.

Little did we know that that was a dress rehearsal, for what was about to come.

Call them “leaders of tomorrow” at your own peril.

These ones are ready, willing and prepared to take up the leadership mantle that my generation failed so woefully to provide.

These young ones have had enough of the mess we created,

They are asking us to get out of the way and let them do what we couldn’t do.

And it’s so appropriate, that it’s coming just as their country clocks 60 – the point where old age really starts settling in and the pride and ides of youth start receding.

Deepest apologies, Generation X, for letting you down, and biggest gratitude, for taking up the gauntlet!

These pictures are my most iconic of the #Revolution_in_the_Making.

Wanted to use only one picture here, but how do you leave out one for the other?

How do you leave out the utter bravery of the guy who stood up to a police teargas – that easily could have been a bullet – picked up the still burning canister and hauled it back at the agents of the oppressor?

Or the modern-day Queen Amina whose fearless truth to power lit the fire in the belly of our youth?

Or the share determination of the lady in black as she rallied her mates?

It it the dead-pan look of the one in white, with a resigned-to-fate, we-die-here expression on her serious face?

Or the two uber-brave, tall and confident ladies who mocked the agents of state as they attack in their armoured vehicle, with the middle finger up?

Or is the one guy who reminds us all by flying the national flag aloft, that this isn’t about self; it is about their beloved country, the one and only country they have?

Or how do you leave out the share power and sacrifice exuded by that young mother atop a vehicle, one hand holding her young child firmly, the other raised in a call for action, in a delicate act of intricate balancing, so that the child she nurtures today would have a chance to grow up, not as an orphan, have a real future and still have a country to call her own?

You make me proud, Generation X.

You make me exceedingly proud.

Has anyone noticed, like I just did, that most of the pictures depict women in the forefront of the agitation? Makes me doubly proud as a father of beautiful, brave and brilliant girls, too. Yes, I see a woman President in Nigeria in the not-too-distant future; certainly in my lifetime. That would be the day!)