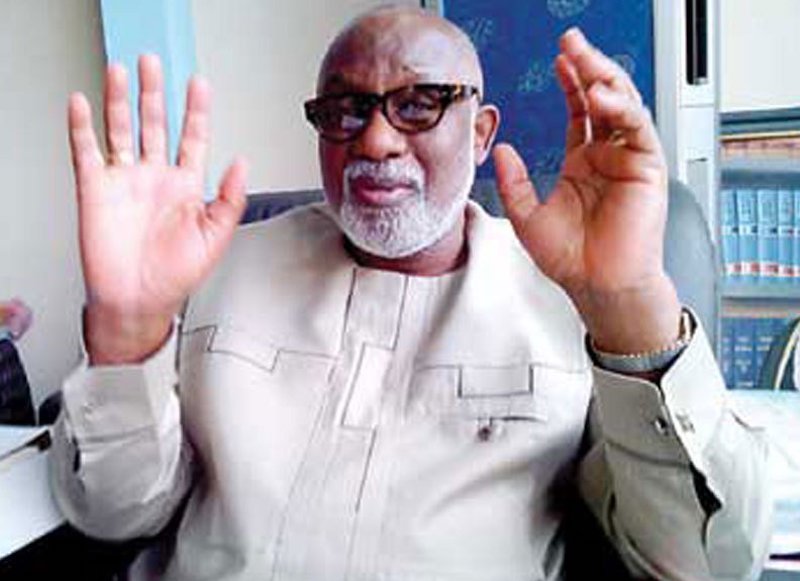 Voters in Ondo state went to the polls on Saturday, October 10. At the end of the exercise, Governor Oluwarotimi Odunayo Akeredolu, SAN, coasted home to victory. The result announced by the National Independent Electoral Commission, NIEC, sorry, Independent National Electoral Commission, INEC, showed that Arakunrin Akeredolu of the All Progressives Congress, APC, garnered 292,830 votes to win the race.

The Ondo State electors used the periodic electoral opportunity to endorse the performance of Governor Akeredolu in the last three and a half years, and offered him a fresh mandate. There is a sense in which one can say God saved Ondo State with the victory of Arakunrin Akeredolu. Before the election, predatory birds of politics hovered over the state. Their desperation to snatch the soul of the Sunshine State was evident in their weapons of lies, falsehood and half-truths.

If they had succeeded, the on-going rapid development in the state would have been stunted. It would have been a tragedy of monumental proportion. But their lies were rendered ineffective by the power of the Lord Almighty and political sophistication of the people of the state.

The love of God for the state manifested itself. Unlike the late former Governor Olusegun Agagu, the fierce river of lies and falsehood failed to wash Governor Akeredolu away from the Alagbaka Government House. The state is not unlucky this time around.

As governor, the late Dr. Agagu was passionate about the development of Ondo State and her people. His government made efforts to enlist the state in the league of industrialised states.

Nigeria relies on oil revenue. Being a geologist, Agagu knew petroleum was an exhaustible natural resource. Oil money would soon stop flowing, according to the late erudite scholar. Therefore, Ondo State must prepare for a future with little or no oil revenue.

If actualised, the project would have strengthened the economy of the state, shored up her internally generated revenue and drastically reduced unemployment rate. One can also imagine the level of economic transformation that the actualisation of the seaport project would have brought. But Agagu was suddenly shoved off the gubernatorial seat. The development halted the realization of these ideas.

All the lofty ideas were abandoned by the immediate successor of the Agagu government. Olokola became moribund. Nothing was done to continue to push the seaport idea. For eight years that the government spent, nothing was done to significantly transform the economy of the state. The African wealthiest man, Alhaji Aliko Dangote, wanted to site his oil refinery in the state. The process had begun. But suddenly, he decided to take the project to Lagos. Up till now, nobody knows why the state lost such a huge economic opportunity.

The immediate successor of the Agagu government laid no foundation for economic development. Oil money was flowing. The administration wrongly thought that was how it would continue to be. It embarked on unthinking, unsustainable and restricted welfarism fuelled by politics. It increased the number of the state-owned tertiary institutions by establishing another university.

No thought about any future revenue challenge. Some months before the expiration of its tenure, the government could no longer pay workers’ salaries. Sustaining its politically-motivated welfarist programmes became a serious problem. It left a load of burdens for the Akeredolu government.

Like Agagu, Arakunrin Akeredolu has a vision of a prosperous and self-reliant Ondo State. He has been pursuing this vision since he came into the saddle. He believes industrialization is the path to a glorious future. His efforts have yielded bountiful fruits. Today, the state boasts of an industrial center where no fewer than seven industries are sited. Many others are still coming.

More than a century ago, bitumen was discovered in the southern part of the state. All efforts to explore it in the past failed. But the Akeredolu government has broken the jinx. An indigenous company has now started tapping the natural resource for the benefit of humanity. The state also has a natural gift of the longest and deepest coastline in West Africa. It is in Ayetoro, Ilaje Local Government Area. It has been lying fallow. Agagu dreamt of bringing a seaport there. He could not actualise it before his government was sacked. Arakunrin Akeredolu is about achieving the dream for the state.

The people of the state see the Oke-Alabojuto road in Ikare-Akoko. They see other life-touching projects and programmes of the Akeredolu government. They know the governor is profusely sweating for the state. That’s why they compensated him with their votes last Saturday. The lies of the opposition failed to sway their minds.

Because they were desperate to occupy the Alagbaka Government House, the opposition unceasingly lied against the governor, his wife, his son and his government. But like a pack of cards, all the lies collapsed on Election Day. The people of the state overwhelmingly voted for Arakunrin Akeredolu. They want him to continue the good work. The lesson here is that Nigerians are getting more and more politically sophisticated. One can no longer tell them white is black and expect them to believe the falsehood.

*Oyewamide is Senior Special Assistant, SSA, to Governor Akeredolu on Media and Publicity