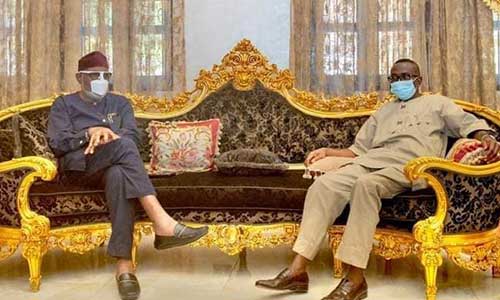 The governor of Ondo State, Arakunrin Rotimi Akeredolu, SAN, has paid a condolence visit to the erstwhile Senate Leader and former Chairman of Niger Delta Development Commission, NDDC, Victor Ndoma-Egba, SAN, over the sad death of his wife, Amaka.

The visitation was revealed in a statement issued by the Special Assistant on New Media to the governor, Olabode Richard Olatunde.

Recall that late Amaka Ndoma-Egba died in a ghastly auto crash on her way to Okitipupa in Okitipupa Local Government Area of Ondo State.

Governor Akeredolu who had earlier condoled with Ndoma-Egba through an official statement, personally visited the former helmsman of the NDDC in his Abuja residence, alongside the Chairman of Ondo State chapter of All Progressives Congress, APC, Engr. Ade Adetimehin and some members of the state executive council.

Akeredolu sympathized with his close friend and fellow SAN, Ndoma-Egba, and prayed to God to grant him and the family the courage and strength to bear the irreplaceable loss.

Recall that the Ndoma-Egba residence has become a Mecca of sorts since the painful death of Amak.a with many other prominent Nigerians having visited Ndoma-Egba in Asokoro to comfort and show love to him and his family members.