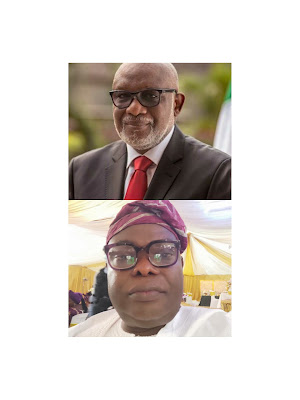 An Akure, Ondo State-based legal luminary and chieftain of the All Progressives Congress, APC, Ifeolu Fasoranti Esq, has described the appointment of the governor of Ondo State, Arakunrin Oluwarotimi Akeredolu, as the South-West Coordinator of the Asiwaju Bola Ahmed Tinubu Campaign Organisation, as “the best choice out of many options available, which deserves commendation of and congratulation to both the appointer and the appointed.”

Fasoranti Esq, made this averment in his disposition to media interrogations in Akure at the weekend, insisting, “It is an indisputable fact that of all APC political juggernauts in the South-West, Arakunrin Rotimi Akeredolu stood out and is still standing like the Northern Star in his latent and patent solidarity reinforcement of the person and mission of Asiwaju Bola Ahmed Tinubu, right from the time when many political potentates in the South-West were dillydallying and engaging in political chicanery.”

Mr Fasoranti further pointed out that “it is very trite and appropriate also on the part of Asiwaju Tinubu to appoint a man of unshakable integrity to the ideals of the APC as a party and the personality of Tinubu as an aspirant ab initio, when some don’t believe he will float and to his emergence as the candidate of the party at the National Convention.”

While congratulating Akeredolu as who he described him as a diligent prosecutor, an energetic implementor and a goal-getter l, who never believed in impossibility and who will not forsake any stone untouched at ensuring victory for Tinubu in the South-West in the 2023 presidential election for the APC, Fasoranti disclosed that “of all the APC political potentates in the South West, Akeredolu towers above all in political sagacity, communal protection and has endeared himself to the people of the South-West via his agrarian commitment to security issue.”

He added, “Akeredolu is the only one out of the lot who has garnered humongous emotional goodwill, whose tentacles permeated all segments of the people of the South-West, irrespective of religion and party affiliation.”

He affirmed with no equivocation that “with the appointment of the brave, fearless, mass mobilizer, inspirational and diligent political mahogany in the person of Arakunrin Akeredolu, Tinubu’s victory at the 2023 presidential election is assured in the South-West.”