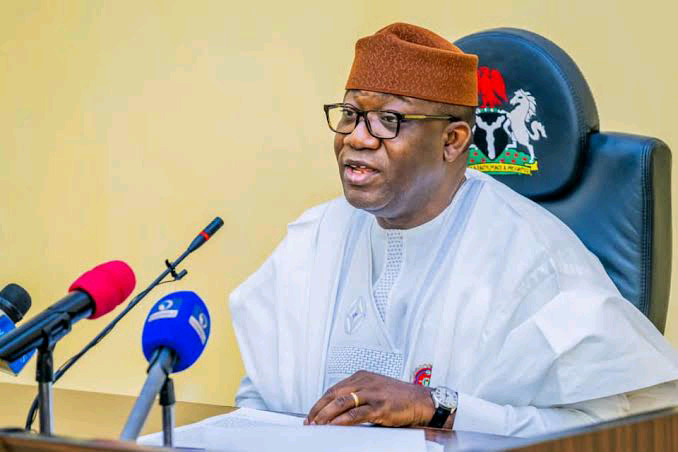 And why not?
Yes.
Why not?
That gap-toothed governor of Ekiti State, Governor Kayode Fayemi, should be pitied, praised and commended for the modicum of achievements he garnered within the last four years of administering Ekiti State.

I give him kudos, for, he justifiably deserves it and I do not care whatever your reaction to my opinion here is!

You are at liberty to conceive, conjure and imagine why I publicly applaud a man who has taken Ekiti State far beyond the level he met it in all ramifications.

That is an incontrovertible fact.
Call it brazen sycophancy, I care not. Call it eye service, that is your headache. I owe nobody any apology for letting out my opinion.

And of course, I’m not forcing you to read it.
I pity him for his strident efforts at weaning Ekiti State from the pang of underdevelopment, even though some people who abhor advancement and who are dark blind to contemporary progressive developments, will not see all that he has conscientiously laboured for and which are growing in the state.

My outburst of praising him here is actuated by his expression of frustration over his energetic efforts at seeing that the Akure-Ado Ekiti road is dualised since 2019, which has been placed on the burner of futility and frustration by the agents of the Federal Government.

The fact is that so many people are ignorant of the peculiarity of Ekiti State and thus used the prism and angle which they apply to view other states, which have been made or fortunate to gauge Ekiti State and judge whoever is in the saddle of the land lock state.

Thus, they fall into the error of generalization and blindly condemn whoever rules the state genuinely, without playing to the gallery.

But, unfortunately, society loves cheap schemes and applauds stomach infrastructure palliative exponent and does not have high regard for fundamental structures and strong institutions.

And in fact, some of the indigenes of the state seem not forward-looking, as they surprisingly preferred fake and loud schemes, instead of sustainable development that will benefit this generation and generation yet unborn.

There are many things that people don’t understand when it comes to Ekiti State among the comity of states.

First, the state is not favoured when it comes to the allocation of resources from the Federal Government, as it ranks 34th or so, out of 36 states, in the allocation order.

Secondly, the state is not on the list of oil producing states, like its immediate neighbour – Ondo State – which enjoys largesse from the extra-oil allocation.

I remember when I was the CPS to former Governor Segun Oni, we were always happy and dancing with horsewhip whenever the state was lucky to be allocated ₦2 billion in any month.

I must reveal today that on one occasion, when I accompanied Engineer Oni to meet one of the governors of Rivers State Engr, after a meeting in Abuja, the two governors were talking about issues of budget and allocation.

As Oni mentioned ₦1.8 billion as the state’s last allocation, the other governor broke into ridiculous laughter and said ‘Your Excellency, your allocation is not enough for me as security vote.’

That was in 2009!
So, I always pity whoever rules the state, no matter the fellow’s patent idiosyncrasies and behavioural patterns.

This is a state where the salary of civil servants consumed over ₦1.5 billion of the allocation in 2009; and it should now be around ₦2.6 billion in 2022.

And the highest earned allocation should be between ₦2.8 and ₦3 billion, taking cognisance of the hyper-inflation.

This is a state in which the only appreciative programme you can offer is the payment of salary promptly and regularly. It is a MUST that the workers should be paid for work done.

This is the yardstick for measuring excellent performance by the people of the state, not by the volume of infrastructure the governor can plant.

For, civil service is the major and only industry in the state.
Thus, failure to pay the workers is a deliberate attempt of shutting down the state.

Also, until recently, due to the determination of Dr Fayemi’s administration to industrialise the state, no viable industry ever roam the geographical colony of the state.

Special thanks to Chief Afe Babalola, who has planted various employment-generating institutions and companies in the state.

And, if you are talking of internally generated revenue, IGR, I always laugh whenever there is a cynical comment about the inability of whoever rules Ekiti State to generate revenue internally.

For the people of the state and the revenue generated agency should be commended for the amount internally generated and being squeezed out of them.

For you cannot generate much from anything.

This is a state created without any seed fund or special grant, like when the old Ondo State was created and the surplus fund was allocated to it for strategic development.

Look, it will interest you to note that the number of signage in Ilesha, Osun State doubles the total number in Ekiti State as a whole!

So how can the state generate heavy revenue from the people waiting for the payment of salary to oil their ‘p’eku p’eku’ trading?

And that is one of the reasons why I am commending and pitying Governor Fayemi for planting, nurturing, grooming and growing the fundamentals needed for the blossoming of a viable and virile state.

Industries are growing in Ekiti State, multinationals are planting farms, the airport is almost ready, agro-allied companies are there, a knowledge acquisition zone is being created and the latest is the planting of power generating plants by Governor Fayemi.

So in the next few months, Ekiti State’s internally generated revenue, IGR, will be shored up conveniently, and not squeezed from the already tight people.

Also, that is why I used to confront those who have been using the crooked Akure – Ado Ekiti road as a benchmark of the performance of Governor Fayemi.

I remember that I had a lot of brute responses from those who cannot think beyond their noises, when Rivers State Governor Nyesom Wilke played to the gallery as usual, and made reference to the failed road, when Dr Fayemi visited him in Port Harcourt by making a mockery that he who could not effect the repair of a road (Federal Government road), wanted to be the President.

I am happy for Dr Fayemi now that he has been able to expose his strident efforts and frustration at seeing that the road is mended or repaired right from 2019!

Governor Fayemi of Ekiti State today reacted to the recent visit of the Minister of State in the Ministry of Transport, Prince Ademola Adegoroye, on the Minister of Works, Mr Babatunde Fashola on the abandoned Ikere-Akure road.

The governor wrote “I have spent the last three years on the subject of this road. Finally got them to award the dualisation in November 2019 at the cost of N30 billion. To date, the contractor has only received N2 billion. I then got money from the AfDB for the road through Adesina and the Federal Government refused to cede the road to Ondo and Ekiti states and threatened us there will be no refund if we went ahead and tampered with their road. In the end, we transferred the money to them and even helped them follow up with AfDB. Up till now, they can’t access the money, because they have refused to follow AfDB procurement standards.

“After that, got them to put in Sukuk money, but the contractor has not been able to access this. We are now pursuing NNPC to include the road in their new tax credit roads they are funding but we are still on it. There’s no month Fashola and I do not speak about this road for the past three years. It has even caused friction between the two of us. If we had been given clearance to do the road and toll it, we offered to do that but the Federal Government refused.
I wish Adegoroye luck on his new venture. Senator Alasoadura did the same and even cried at FEC meeting on account of the road. Maybe he will succeed where we have not.”

Now those who mocked him on this should ask for forgiveness. Those who thought ill of him, because of this road can offload their mind off him.

Those who are using this singular road as their benchmark of accomplishment for him should be sorry for themselves. And whoever is using this to judge Governor Fayemi is not only mischievous but grossly malicious.

Thank God, the albatross is off his neck. It is just another pointer that the call for restructuring of the nation is urgently needed.