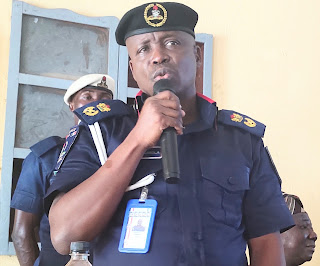 The governor posited that only a new approach and
strategy by the security agencies can reverse the trend of banditry, kidnapping, insurgency and other forms of criminality.

He gave the advice while receiving the new State Commandant of the Nigerian Security and Civil Defence Corps, NSCDC, Niyi Ajibola, at his Oke Mosan office, in Abeokuta the Ogun State capital.

Governor Abiodun said that it was imperative for security agencies to fashion out an all encompassing and efficient method that would not only address the menace of unsecurity, but also nip it in the bud.

He said, “Ogun is a unique state in terms of geography. We have boundaries with four states as well as an international border. We place priority on supporting security agencies, because of our position as the industrial hub of this country.

“We have a lot of people criss-crossing the state, hence, the premium on security.”

Observing that security was not only about providing the needed weapons, but also ensuring adequate welfare to the officers and men, the governor added that the relative peace Ogun State was enjoying was as a result of the synergy among the various security agencies.

He said the state in the past three years, has risen to the security challenges by establishing the Amotekun Corps to assist the federal security agencies, noting, “We cannot afford the break down of law and order that will threaten the commonwealth of the state.”

The governor described Commandant Ajibola as a fine officer with rich and diverse experience, having transversed the length and breadth of the country in the course of serving his fatherland.

In his speech, Commandant Ajibola said his mission was to support the government to meet its policies and programmes, by ensuring adequate security in all the nook and crannies of the state.

Ajibola decried the upsurge of cult activities in the state, pledging that the Counter Terrorists Unit of the Corps would assist the state in tackling the menace, while plans are on to establish a Quick Response Squad to respond to emergency security cases around the state.

Pledging to serve the state better through increased visibility, the new commandant also pledged that the organization would scale up its operations as the general elections draw near, to guarantee safety of lives and property of the people, before, during and after the general elections.