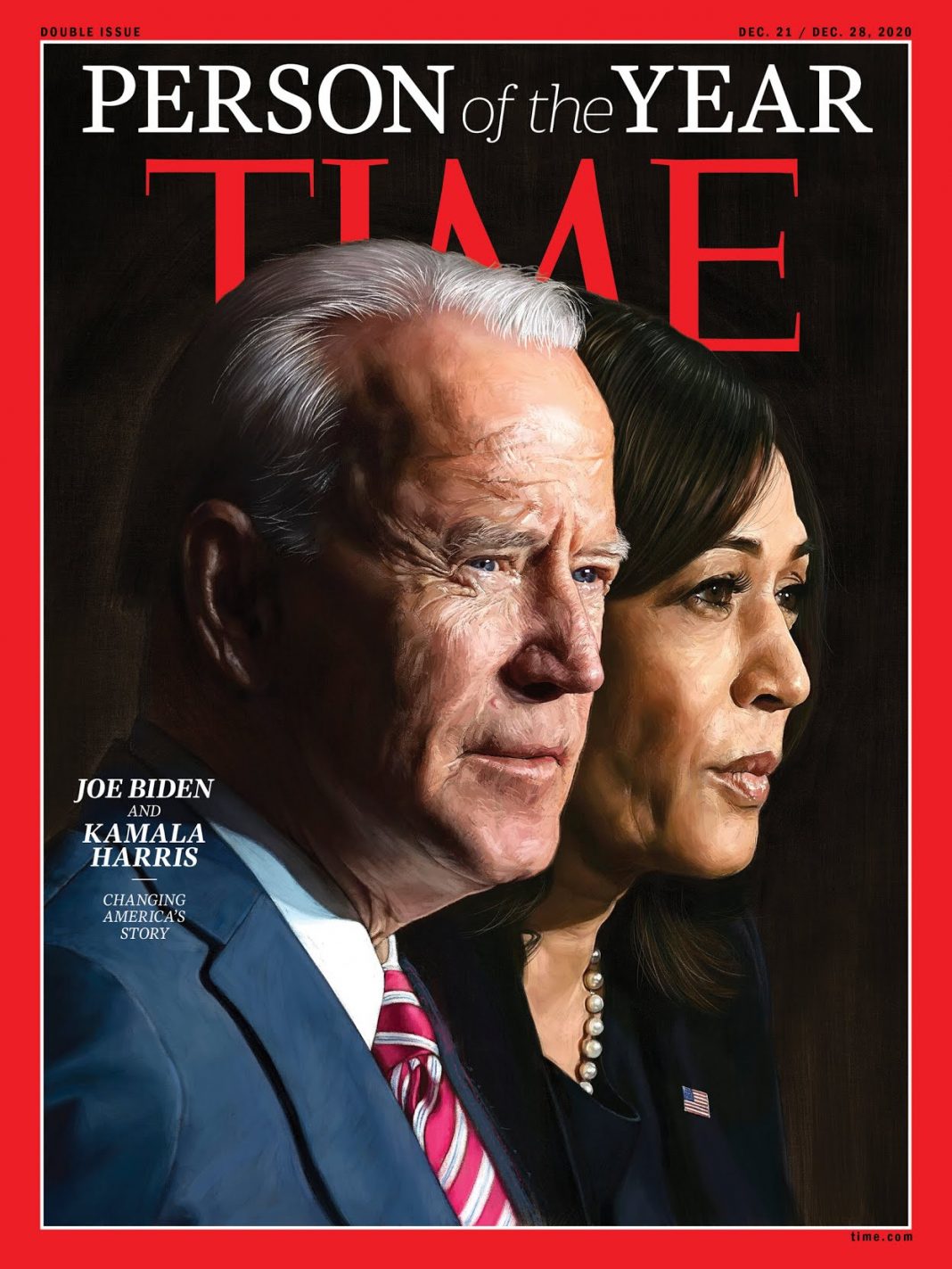 Time magazine has named United States of America, USA’s President-elect, Joseph R. Biden Jr. and Vice President-elect, Kamala Harris, as its persons of the year 2020, citing the weight of the pandemic and racial injustice that will be shouldered by the history-making Democratic ticket.

Bruce Springsteen, who narrated a television ad for Mr. Biden during the campaign, revealed the magazine’s choice at the end of an hour long television special on NBC.

Biden, 78, immediate past former vice president under President Barack Obama, and Ms. Harris, 56, a U.S. senator from California, who made history by becoming the first black woman and the first Indian-American to be elected to the vice presidency, will appear side by side in a portrait on the magazine’s cover on December 21.

Earlier, on the ‘Today’ show, Time announced the four finalists for the recognition.

Editor-in-Chief nad Chief Executive Officer of Time, Edward Felsenthal said, “Time has always had a special connection to the presidency.”

Noting that it was the first time that the magazine had chosen to include the vice president as a person of the year, Felsenthal said, “Person of the year is not just about the year that was, but about where we’re headed.

“The next four years are going to be an enormous test of them and all of us to see whether they can bring about the unity that they promised.”

Mr. Biden, appearing in a taped segment of the show, said that had Mr. Trump been re-elected, it would have changed who Americans were for a long time, adding “This moment was one of those do-or-die moments.”

Ms. Harris, who began the campaign as a candidate for President, acknowledged the pressure that she and Mr. Biden would face.

She said, “We’re at a moment where we’re being confronted by many crises that have converged.”

Frontline health care workers were among those Time considered for the person of the year honor.

At a time when weekly print magazines have struggled to remain relevant in the media landscape, the marketing hype over the purely ceremonial distinction has continued to create fanfare for Time.

The tradition goes back to 1927, when Time named the aviator, Charles A. Lindbergh its first man of the year, as the honor was then called.

The magazine, which began publishing in 1923, has bestowed the distinction on presidents, peacemakers, astronauts, popes and Queen Elizabeth II, on American women and the endangered earth. But some of the newsmakers chosen turned out to be infamous; Time selected Adolf Hitler in 1938 and Joseph Stalin in 1939, a distinction that was given to Stalin again in 1942.

Noting in 2014 that its selection process is not a popularity contest, Time however, stated that its choice reflects “the person or persons who most affected the news and our lives, for good or ill.”

Last year, Time named the young climate activist, Greta Thunberg, as its person of the year, choosing her over House Speaker, Nancy Pelosi, Mr. Trump, the Ukraine whistle-blower and the Hong Kong protesters.

The choice of Ms. Thunberg, who sailed across the Atlantic in an emissions-free yacht before her speech last year at the United Nations Climate Action Summit, rankled Mr. Trump, calling the nod to Ms. Thunberg “ridiculous” on Twitter.

In 2018, the magazine selected a group of journalists, including the murdered Saudi Arabia dissident, Jamal Khashoggi, as its persons of the year.

The magazine said it wanted to underscore the threats faced by independent journalists at a time of so much disinformation. The journalists included the staff of The Capital Gazette newspapers in Maryland, where five people were shot dead in June 2018.

The previous year, Time recognized “the silence breakers,” a group of women, who catalyzed the ‘Me Too’ movement when they stepped forward to accuse powerful men of sexual harassment and assault.

Before the magazine revealed its pick in 2017, Mr. Trump boasted on Twitter that he had been told he would “probably” be chosen again and claimed to have turned down the recognition. Time quickly released a statement saying that the president was incorrect. With his upset victory over Hillary Clinton in the 2016 presidential election, Mr. Trump was chosen as Time’s person of the year for 2016.

The last three presidents, Bill Clinton, George W. Bush and Barack Obama, each of whom was elected to a second term, unlike Mr. Trump, were named Time magazine person of the year twice while in office.

Nine presidents have been selected more than once by the magazine, with President Dwight D. Eisenhower first recognized in 1944 for helping lead the Allies to victory in World War II as an Army General. President Franklin D. Roosevelt was named person of the year three times.