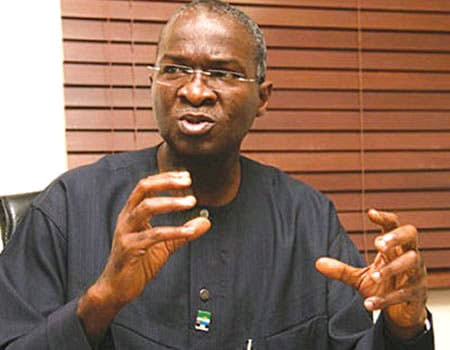 As the Third Mainland Bridge in Lagos was finally opened for traffic at the weekend after its closure for repairs since last year, several jubilant Lagos residents, motorists and other road users were full of praises for the Minister of Works and Housing, Mr. Babatunde Raji Fashola, SAN, for a job well done.

Our correspondent, who went round the city reported that residents, particularly those whose daily routine requires plying the second longest bridge in the West African sub-region, expressed relief over the complete opening of the project, with the belief that Fashola, in his characteristic manner of thoroughness, must have done a perfect job on the repaired portion of the bridge.

An Epe resident, Comrade Olawale Oladipupo enthused, “We can be rest assured that, since the repairs were supervised by Fashola, nobody would entertain the fears that the bridge could collapse anymore.”

Comrade Oladipupo, added that “with Fashola as supervisor of any project across the country, one can be assured of perfection.”

Another resident, Mr. Adeyemi James, who lives around the Oworonsoki axis of the bridge expressed the delight that “my daily trips along the bridge have resumed with ease now,” admitting that “though, the about nine-month repair works caused a bit of discomfort, it is now time for gains after pains.”

Also, a commercial bus driver, Mr. John Chinedu, who plies the Oshodi-CMS route, was all smiles when declaring that “our patience during the repairs is now yielding dividends with our confidence that Fashola must have done a good job on the project.”

Chinedu enthused that “there is no more of the bridge collapsing anymore.”

A roasted meat, popularly known as ‘suya’ hawker at Obalende, Mallam Salisu Dantajira, said, “My daily journey from Mile 2, where I live to Obalende now has become faster again with the opening of the road. The closure was an indication that the Federal Government gives priority to the people’s wellbeing.”

A textile merchant at Idumota, Alhaja Samiat Oyewemi, who plies the route from Sango-Ota Toll-Gate in Ogun State, told our correspondent that “in addition to the completion and reopening of the project, it is reassuring that since the project was supervised by Fashola, the fear of shoddy job is over,” asserting that “perfection is Fashola’s second name.”

Madam Lizzy Kalu, who operates an eatery around Tafawa Balewa Square, Lagos in a chat with our correspondent thanked the Federal Government for its thoughtfulness to repair the faulty portions of the bridge adding that “whoever knows Fashola would testify that, the bridge was handled by a man with the Midas touch.”

Recall that when the bridge was discovered to have developed some faults at some points, the Federal Government announced its closure for six months last year, to allow for repairs. The works that were slated to end latest around December, 2020 eventually dragged to February 2021, due to the EndSARS protest that disrupted activities on the bridge.

It Hurts Breastfeeding My Baby -Bambam