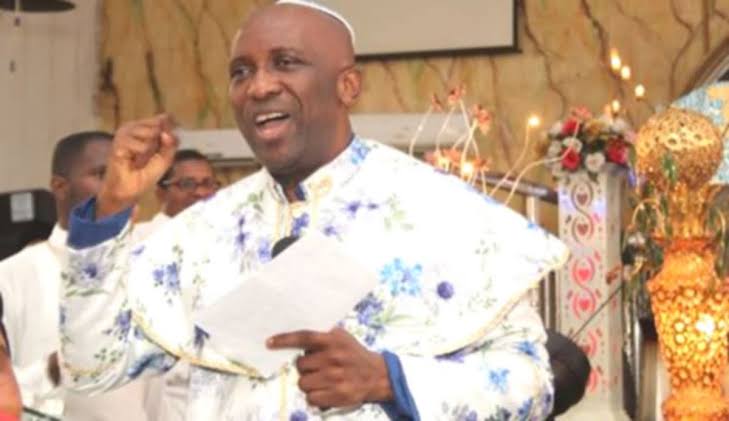 …Without Sanwo-Olu, APC Will Lose

The ambition of former governor of Lagos State governor mad national Leader of the All Progressives Congress, APC, Asiwaju Bola Ahmed Tinubu to rule Nigeria will not see the light of the day.

Leader of the INRI Evangelical Spiritual Church, Primate Elijah Ayodele, disclosed this while unveiling prophecies for the coming year, where he painted the pictures of what will happen in the political terrain of the country come 2023.

Ayodele made these revelations on Wednesday at the headquarters of his church at Oke-Afa in Lagos State.

He predicted, “For Osun elections, the Peoples Democratic Party, PDP, does not have any sellable candidate.

“If (Governor Gboyega) Oyetola is doing it this way, he will still come back for second term, no doubt about that.

“In Ekiti elections, if the PDP gives the ticket to Segun Oni, it will be very tough for him.

“Fayemi should not look outward but inward.

“The person who can succeed the party is in his cabinet.

“Igbo cannot be president of this country. They are just deceiving themselves.

“Orji Kalu, Rochas, they are just jokers. They shouldn’t waste their money. They should wait for their time.

“The PDP will be the answer of the day for Imo State (senatorial bye) elections.

“Whatever Asiwaju Tinubu wants to do as President in 2023, they are deceiving him.

“They will rubbish him, and he will even regret why he came out.

“I am advising him to go and relax, because of his health and the fact that they don’t want him.

“God also said he should hold Lagos State very well, because it won’t be business as usual.

“If he disallows Sanwo-Olu from running for second term, they won’t see his party as serious in 2023.

“So, he should still hold on with Sanwo-Olu.

On what to do to achieve a better Nigeria, the man of God, with an almost 100 per cent accuracy in his prophecies said that “the only way we can have a better Nigeria is to have true federalism, where every state will depend on their resources or we break.”

He added, “There are people who want to frustrate restructuring. And for it to come to reality, we are going to struggle.

“If Buhari is not careful, another protest is coming next year and that protest will ruin his government.

“He must not allow it and do what is right before it is too late.”

On what the future holds for the new President-elected of the United States of America, USA, Joe Biden, Primate Ayodele said, “Joe Biden will perform better than Trump and he will change a lot of things, which will make the world more better and safer than Trump did.

“The only thing is that we should pray for him to do second term, because it might be difficult to run for second term but he will perform very well.”

In sports, the cleric warned Barcelona football ace, Lionel Messi to be careful, saying, “If Messi is not careful, he will be rubbished in Barcelona.”

He also predicted qualification for the African Nations’ Cup and FIFA World Cup for Nigeria’s Super Eagles; adding that the present coach will not make them proud.

He added that they won’t perform so well in the Nations Cup, except they play like one family; only then can they make it to runners-up or second runners-up position.

He said, “They will also qualify for World Cup, but it will be tough for them.

“Let’s pray not to lose a coach and a player in the Glass House.

“There will also be a new Nigerian Football Federation, which I can see that they are zoning it to the North.

“The North will coordinate NFF better than what Amaju Pinnick is doing now.

“We also have to pray against attack on any of our players.

“All the corrupt practices in the football sector will be exposed after Pinnick leaves office.

“They should also be watchful of some incompetent player in the Super Eagles, who got there by influence.

“The Fédération Internationale de Football Association, FIFA, will fight against racism and they will lose a very prominent staff in the coming year.

“There will be so many troubles in the Confederation of African Football, CAF, and they will experience mismanagement and corruption.

“Let’s also pray against stampede in the stadium.

“And our Mobile Premier League
will have to be very prayerful, because I am seeing some kind of trouble there.

“Some clubs will take them to court and they are also going to fight with some clubs.

“Some coaches licence will be withdrawn even in Nigeria.”