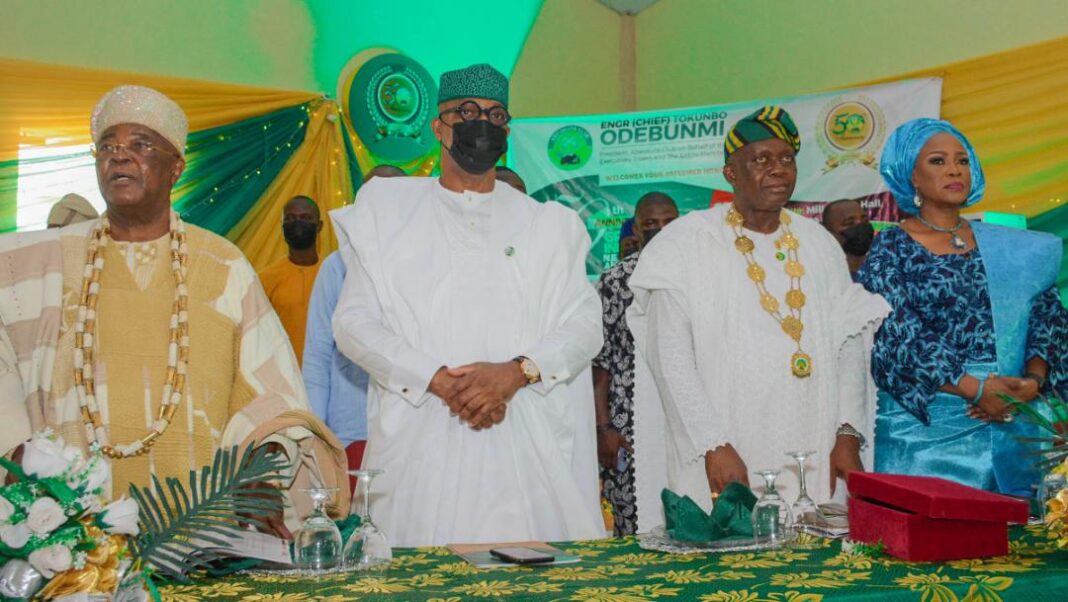 The governor of Ogun State, Prince Dapo Abiodun, has said that he remained focused on delivering good governance to the people of Ogun State, insisting that he would not be distracted by anybody who has a problem with self delusion.

Noting that “Ogun State is not anybody’s father’s inheritance,” Abiodun, who was apparently responding to a statement credited to his predecessor, Senator Ibikunle Amosun, that the 2019 governorship election was rigged in favour of the incumbent governor, said that he would rather focus on his mandate and not join issues with anyone who wants to play God.

Recall that Amosun had on Friday said that the election that produced Governor Abiodun as Ogun State governor was fraudulent, vowing that he would ensure the removal of the governor from office come 2023.

Speaking with newsmen shortly after the grand finale of the 50th anniversary of the Abeokuta Club, Governor Abiodun called on the people of the state to ignore his predecessor, insisting that he would not join issues with him.

“I am not going to join issues with anyone that wants to play God; I will leave them to God, God can deal with whoever is challenging His authority and wanted to play God. All I can say is that what we stand for in Ogun State is administration that is committed to providing purposeful leadership and purposeful infrastructural development across the length and breadth of the state.”

He, however, expressed his disappointment that a former governor and a sitting governor in 2019 would cry that he was rigged out during the election.

He queried, “How can we that are on the outside take on an incumbent and then be accused of rigging out an incumbent in the same party? Anyone can explain their failure whichever way they like, anyone can also begin to pant and threaten that they will do whatever.”

Abiodun, who also noted that his administration would as a matter of urgency prioritize the development of the President Muhammadu Buhari Estate, added that before the end of the year, a minimum of two hundred and fifty structures would be built in the estate.

He said, “The President Muhammadu Buhari Estate, which is one of the projects I inherited from my predecessor, in another one or two months, you will see that buildings will begin to be visible in that estate.

“I do not have a doubt that before the end of the year, there will be a minimum of about 250 medium upper beautiful befitting structures in PMB Estate.”

The governor declared that his administration would continue to give Abeokuta, the state capital all the attention it deserves, insisting that the Ijaiye-Oke-Ejigbo-Ake road, Saje-Mokola road as well as the Onikolobo-Adigbe road are some of the roads slated for attention by his administration.

Abiodun also informed members of the Abeokuta Club that all the roads projects embarked upon by his administration since it came on board were done after due consultation with traditional rulers and elder statesmen.

In his welcome address, the President of Abeokuta Club, Tokunbo Odebunmi, said that the club is not just a social club, but a cultural movement which analyses the past with a view to protect the future, adding that members of the club would continue to embrace oneness and love in Egbaland.

While calling on new inductees of the club to cooperate with government at all levels to make the country a better place, he also charged them to be law-abiding.

Odebunmi, however, declared that the people of Egbaland are ready to continue to support the present administration in the state.

Speaking, the paramount ruler and Alake of Egbaland, Oba Adedotun Aremu Gbadebo, while appreciating Abiodun for the housing and road projects in the state capital, submitted that “Governor Abiodun is a man of his words.”

LASUBEB Pays N215m benefits To Deceased Employees’ Next Of Kin