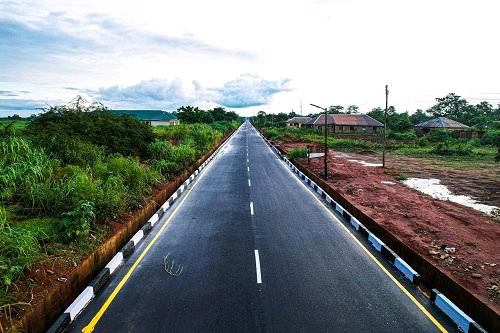 The commissioning of a 2.4-kilometre Oke-Ola Road in Imeko Afon Local Government Area of Ogun State last week by Governor Dapo Abiodun has been described as the needed tonic to boost commercial and farming activities in the area.

The road, which connects with neighbouring communities in Oke-Ogun area of Oyo State, was constructed by the Ogun State government to ease movement of farm produce, goods and services from farmlands to urban centres in the two states.

Prince Abiodun, at the commissioning, noted that the newly constructed road was a departure from the past, as it leads to and connects Oyo State, with the aim of boosting business activities in the area with consequent increase in revenue generation into the coffers of the government.

Abiodun said that Imeko-Afon Local Government Area is endowed with abundant and vast land that is more suitable for growing farm produce and also with potential forest.

Prided as an agriculture zone, it was learnt that the construction of the road will boost cotton production in the area, which has been described as the best in the country in terms of quality.

A farmer and industrialist, Alhaji Ganiyu Elegbede, said that the Oke-Ola Road means a lot to traders and farmers, because of its multi-purpose nature.

He averred that the road will boost farming and commercial activities, ensure smooth movement of agricultural produces from farmlands to towns, while also ensuring that industrial products reach intended markets without stress.

Alhaji Elegbede stressed that the rehabilitation of the road has come at the right time, even as he expressed gratitude to Prince Abiodun for the gesture.

Commissioning the road, Governor Abiodun said, “For the past 15 years of neglect, this road project is coming for commissioning as a testimonial of our administration’s commitment in keeping to our promises.

“Some deceived some people, because they had no good intention. We cannot do everything, but we will do those ones that we promise and are of economic benefit to all and sundry. So, we are a promise-keeping administration.”

Another resident, Mr. Ebenezer Adekunle, who combines driving with farming, expressed gratitude to the state government for reconstructing the road.

Adekunle commented the Abiodun administration’s effort, saying that it has come as a big relief in his trade as a driver and farmer.

Also eulogizing the governor for keeping to his promise, Onimeko of Imeko, Oba Benjamin Olanite, described Abiodun as a care-giver, promise-keeper, a lover of people, and a responsive and responsible leader, who goes out of his way to bring smiles to the faces of the people.

A seasoned politician, Prince Gboyega Isiaka, also known as GNI, while commending the governor for his intervention in bringing succour to residents of Imeko and its environs, who are predominantly farmers, beckoned on Abiodun to take advantage of the vast forest in the area to enhance the economic potentials of the state.

Isiaka, who is an indigene of Imeko and also a chieftain of the All Progressives Congress, APC, stressed that the community is endowed with vast forest, but which now harbours all manners of people.